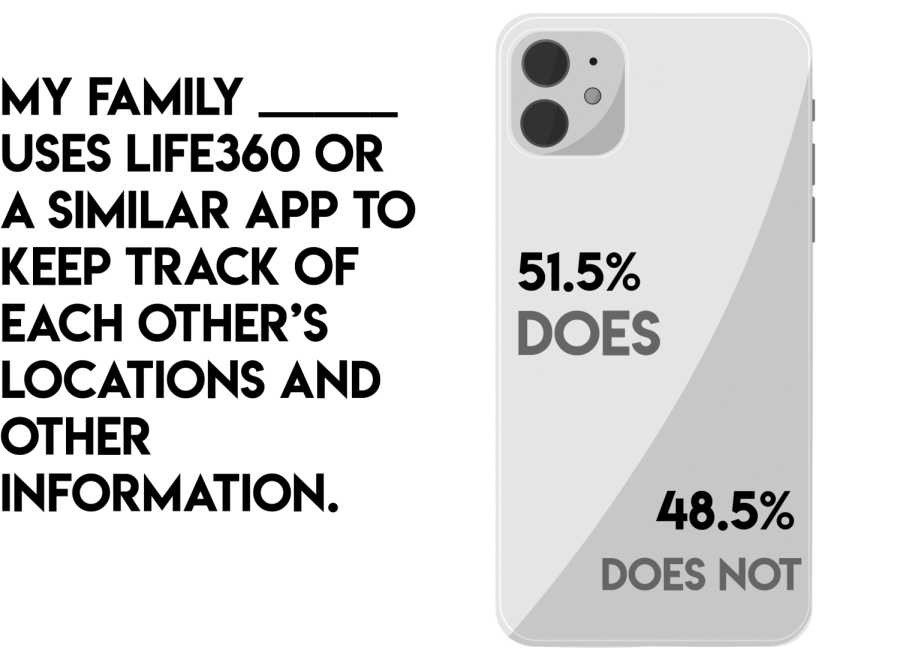 Instead of calling out “be home before dinner,” the modern parent has not only the technology needed to text their child a curfew reminder, but also know where they are if they miss it.

Life360 is one of many tracking apps that have risen in popularity among family audiences, surpassing 18 million monthly users at the end of 2018. Life360 allows its users to see exactly where friends are, where they’ve been, their battery percentage and even how fast they’re driving. Additional features include crime alerts, roadside assistance and directions.

In a recent poll taken by Life360, about 70% of teens did not mind sharing their location with family. Sophomore Isabella Ji of Holmdel falls under this umbrella, agreeing that she does not mind her parents accessing her whereabouts.

Other students, however, feel differently. An anonymous junior said her parents downloaded Life360 after she was caught sneaking out, and hates having the app on her phone.

“Even though I like it for safety reasons, it’s a little bit too nosy and it has too many things to know too many exact details,” she said.

Another junior who wishes to remain anonymous said his mother downloaded the app because she wanted to make sure he remains truthful about his location. But he, along with many other teens, has found clever ways to sneak around it.

To avoid being caught, he and his friends first drove to the movie theater where his mother expected him to be. Upon arrival, he turned off his cellular data so it would show him at the first location before driving to the theater outside of town.

Other students also admitted to turning off their location, data, or simply powering off their phones before going out.

Junior Erin Carr of Wall does not make a habit of sneaking out, but is annoyed by the constant connection to her mother. Even her dog has learned to recognize the alert sounds from the app and barks in excitement whenever he hears it.

“I don’t think any parent should have to worry about their child, but parents should learn to trust their children,” said Carr.

Safety concerns are the main reasons why parents download the app, but the line between safety and privacy can sometimes blur.

“It comes down to the conversation that you have with your kids,” said biology teacher and mother Jeanine Gomez, who uses Find My Friends to monitor her daughter’s activity. “It depends on the family and what it’s really being used for.”

Tara Jones, mother of sophomore Lily Jones of Spring Lake, feels as if tracking technology is not an invasion of privacy; rather, it is a tool to keep one’s child safe from predators and other threats.