Do they raise awareness or exploit the problem? 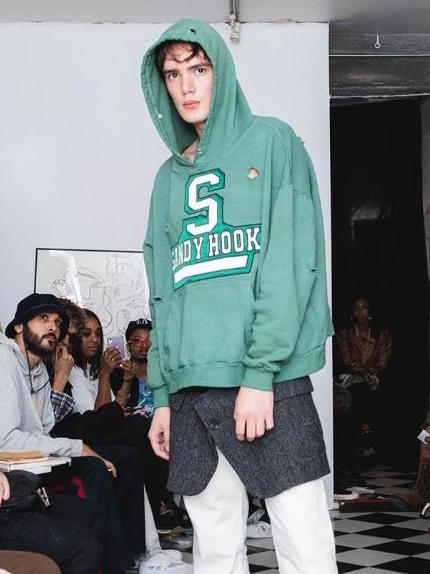 A model poses in a sweatshirt from Bstroy's school shooting collection on Sept. 15, 2019. The inclusion of bullet holes in the clothing sparked controversy.

Columbine. Sandy Hook. Marjory Stoneman Douglass. Virginia Tech. These names appeared on a sweatshirt introduced by streetwear company Bstroy on Sept. 25, 2019. Though the hoodies may appear ordinary at first glance, there are tears resembling bullet-holes permeated throughout the fabric, resulting in national controversy.

Dieter Grams, co-founder of Bstroy, explained the original intent of the hoodies in an interview with Time.

“We wanted to make a comment on gun violence and the type of gun violence that needs preventative attention and what its origins are, while also empowering the survivors of tragedy through storytelling in the clothes,” Grams said.

Despite the original message of the hoodies, some victims of school shootings, as well as family members of survivors, said they were appalled by the sweatshirts. According to The New York Post, the Vicki Soto Memorial Fund, which was created for a teacher who died protecting her students in the Sandy Hook shooting, wrote that the company should not use the grief of the families for their benefit.

“As a Sandy Hook family, what you are doing here is absolutely disgusting, hurtful, wrong and disrespectful,” they wrote on Instagram. “Our pain is not to be used for your fashion.”

A few years prior, a collection on the runway at New York Fashion Week sparked a similar controversy in 2017.

Daisuke Obana,  head designer of Japanese menswear company N. Hoolywood, was prompted to send his homeless inspired piece down the runway because of what he saw after he visited cities in America to get a better understanding of the culture.

According to Fashionista, “His observations of these so-called homeless or street people revealed that them [the clothing] to be full of clever ideas for covering the necessities of life.”

“[The collection] served as a reminder of an often invisible population,” said Guy Trebay, a cultural reporter for the New York Times. “One that, in light of recent studies showing that in almost no place in the United States can a person working a 40-hour week at minimum wage afford a one-bedroom apartment at fair market rent, seems destined to increase.”

Obana’s work has covered other issues like this in the past, including climate change and police brutality. “Often my desire to express a theme is so strong I end up making ‘works of art’ rather than wearable pieces,” Obana said in an interview with Grailed.

He wanted to spread awareness through his art, but people may think this has gone too far.

Junior Anabell Mazzan of Fair Haven said she believes that Obana could have presented the issue in a more sensitive way to spread awareness to the subject.

“It’s something that people have to go through every day, and for high end fashion to try to mimic that poor look is just not okay,” Mazzan said.

On the other hand, freshman Lucy Battista of Tinton Falls said she believes Obana’s collection is a good way to draw attention to the issue of poverty, siding with Trebay’s response to the show.

“I think that for the most part it spreads awareness because it’s really out there and it obviously calls attention to the problem that most people don’t think about,” Battista said.