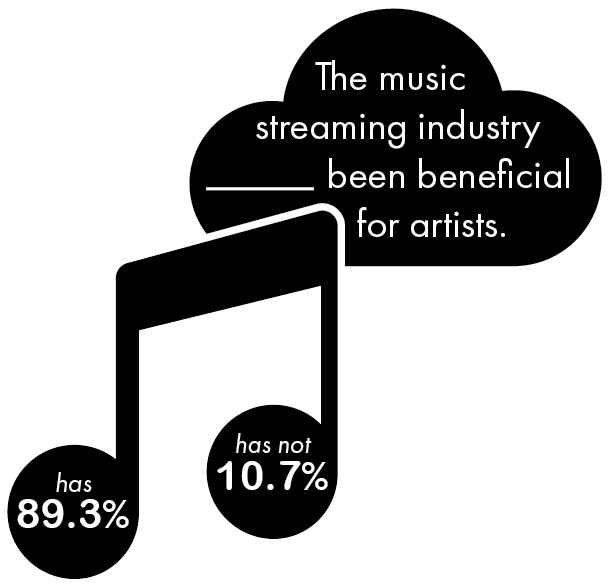 “The music industry is not dying…it’s just coming alive.”

In July 2014, Taylor Swift wrote this for The Wall Street Journal. She believed that although the music industry continued to thrive and develop with the online accessibility of music, the rising popularity of streaming services, file sharing and piracy were a detriment to the industry. At the time that Swift removed her entire discography from Spotify, digital album sales declined by 12 percent while streaming services usage increased by 42 percent, according to Time. As the presence of online music grew, Swift overcame challenges that produced advantageous results for both herself and all musicians.

Now, all of Swift’s music is on Spotify, including an exclusive enhanced version of her new album “Lover.” Releasing “Lover” directly to streaming services proved that the decrease in copies sold compared to Swift’s past albums did not affect Lover’s good chart performance. It sold 679,000 copies, but still managed to have the biggest sales week of the year and placed first on the Billboard 200 chart. Streaming services contributed greatly to the overall consumption — the album had 226 million audio streams in its first week, according to The Wall Street Journal. Swift’s original crusade against the legalities of streaming services influences the success that musicians are able to achieve by utilizing the online accessibility of music.

While Spotify and Apple Music are geared towards established musicians, SoundCloud is a platform for new musicians. SoundCloud provides exposure to record labels and music producers, and makes it easy for musicians to collaborate with one another. The shuffle algorithm gives listeners a variety of songs based on their preferred genre, which helps lesser-known musicians gain a fanbase.

Junior Connor Hipsher of Tinton Falls, who uses the Soundcloud username Echo, became an official artist on Soundcloud in October 2018. When he realized that people actively listen to his work, it inspired him to improve to impress and provide for his fanbase. He maintains an audience by collaborating with other artists and regularly posting music. Soundcloud allows his work to reach a larger audience and helps him make a career out of music.

“Music streaming is definitely a good way for artists to be able to get themselves mainstream, which seems to be the goal of most artists,” Hipsher said.

Streaming services have changed the way an artist’s work is publicized and appreciated. Both promising and established artists are taking the changes in strides, just like Taylor Swift encouraged them to back in 2014.

“It isn’t as easy today as it was 20 years ago to have a multiplatinium-selling album,” Swift said. “As artists, that should challenge and motivate us.”