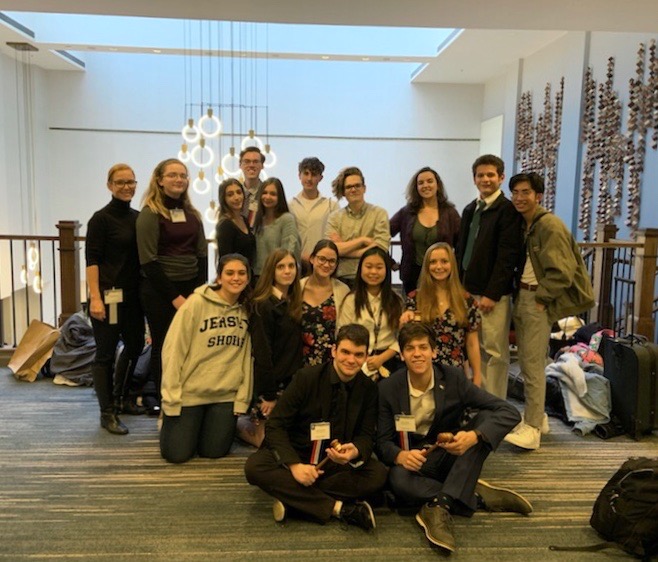 CHS entered with a strong arsenal of assigned speakers, and left with several awards for each speech.

CHS’s Junior State of America (JSA) chapter attended the organization’s annual Fall State convention in Woodbridge, N.J. from Saturday, Nov. 16 to Sunday, Nov 17. Each fall, the national organization invites chapters from over the Mid-Atlantic region to debate with their peers.

This two-day event, supervised by nurse Dorothy Condon and parent Tiffany Battista, gave an opportunity for a group of 20 students to debate the future of American politics. The debates varied from topics like feminism and the nature of business to less serious topics like Olive Garden’s unlimited breadsticks policy.

The convention began with a keynote speech from Abbe Lowell, a defense attorney who was involved with the impeachment trial of President Bill Clinton and currently defends Jared Kushner during the Trump impeachment hearings. The speech was followed by several different debates happening around the hotel.

CHS entered with a strong arsenal of assigned speakers, and left with several awards for each speech. CHS JSA members were able to voice their opinions to their Mid-Atlantic peers, and the winners were presented with a decorated gavel for being voted the Best Speaker for their block. Winners included seniors Vaughn Battista of Tinton Falls, Dane Tedder of Ocean, Ryan Swanson of Brielle and junior Georgia Trentalange of Middletown.

On Saturday night, students could enjoy activities like karaoke, movies and a dance with a DJ. These events were held throughout the various hotel ballrooms and allowed students from different chapters to spend time together in a non-formal style.

Vaughn Battista, who serves as JSA co-President alongside Tedder, won best speaker award at the convention and was glad he could make a contribution to the CHS chapter.

“Not only was it great for me to win a best speaker award, but it was really great seeing people across the chapter win best speaker awards,” Battista said. “I really think our chapter did a great job at this convention.”

Freshman Cameron Flemming of Oceanport was a first-timer to the convention and liked his experience, but had a few critiques.