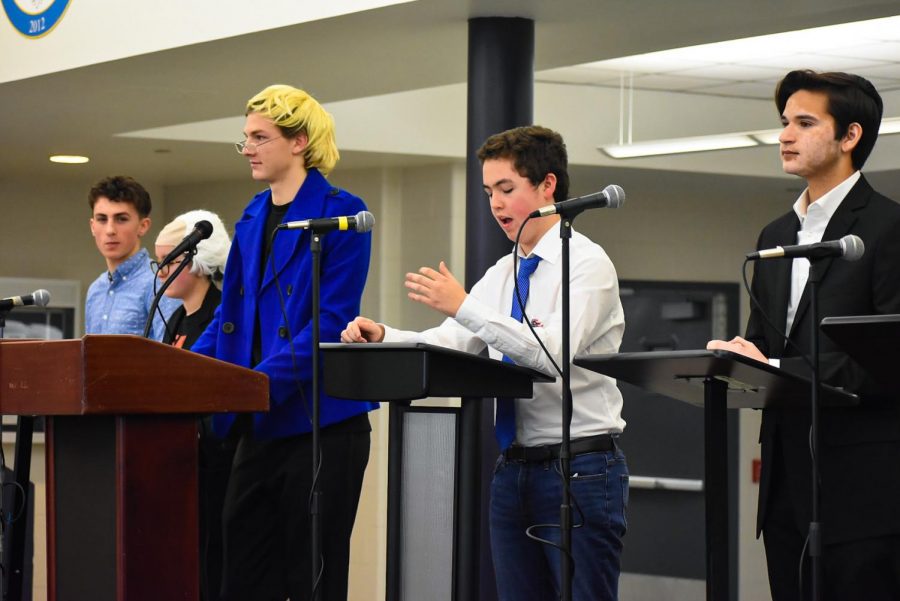 The debate took place at 10 a.m. with all four periods shortened to accommodate the event. Starting on Monday, candidates put up posters, ran TV/Radio ads, held rallies and campaigned throughout the school in preparation To kickoff the debate, JSA Co-Presidents and seniors Dane Tedder of Ocean and Vaughn Battista of Tinton Falls and JSA Vice President and senior Katherine Lombardi of Middletown introduced themselves as moderaters and explained the debate format.

A brand-new event for CHS, Tedder described how the debate was planned, saying the club began organizing with administration and searching for candidates in December.

“We started over the summer and we thought the idea seemed like something CHS could do,” Tedder said. “Prior to the event we had to get people to volunteer as candidates and then we came up with topics to assign them.”

The three moderators gave each of the prospective candidates questions ranging from topics of healthcare to climate change.

When asked about Sanders’ policy focus on fixing income inequality in America, Schieder spoke of the salary disparity in the corporate world.

“Workers should not be paid low wages while CEOs from Amazon and McDonald’s make ridiculously high compensation,” Schnieder said.

Junior Kiera Higgins of Sea Girt enjoyed the debate and was impressed with the preparation of the candidates.

“I thought they did a great job representing each of the candidates and they all seemed like they prepared well for this,” Higgins said. “I voted for Amy Klobuchar because I believe that she was the most prepared and she made a lot of good points that I agree with.”

After the ballots were tallied and announced at the end of the day, Buttigieg, Biden, Sanders, Warren and Klobuchar placed sixth, fifth, fourth, third and second respectively. Yang took first place with over 70 votes, which was approximately 30% of the voting population.

Sequeira was surprised with the result but worked hard to make sure all the facts were correct for the candidate he was representing.

“I am both extremely surprised and happy that I won… I watched hours of interviews and podcasts of Yang, and I took notes as I listened,” Sequeira said. “I underestimated how much my words and delivery during the debate could impact the outcome.”