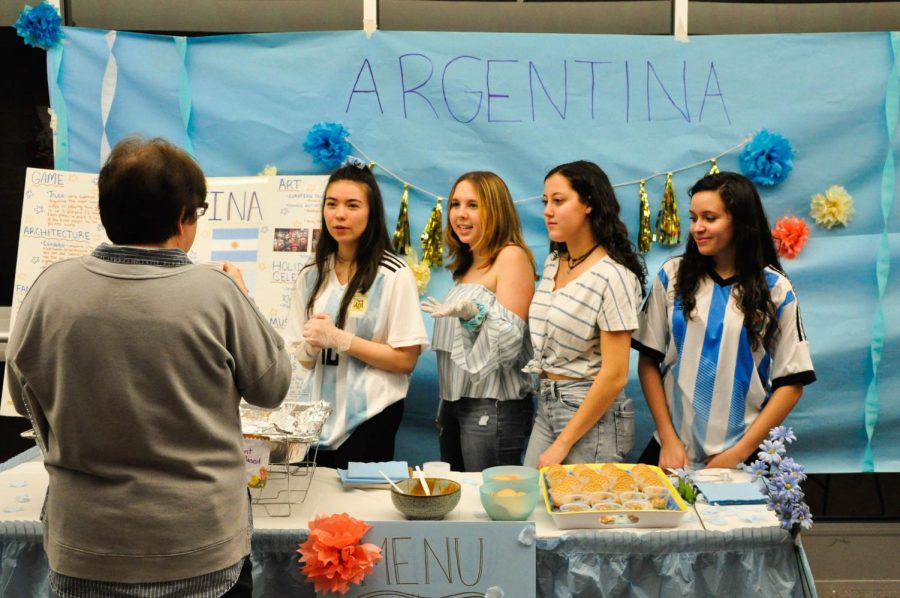 (From left to right) Teacher Laura Gesin listens to seniors Jill Fukushima of Eatontown, Alexa Feder of Millstone, Naomi Littenburg of Lincroft, and Elena Perez of Hazlet talk about their country, Argentina.

As guests arrived at CHS on Friday, March 6, they were greeted with the smell of Belgium waffles and Australian meat pies. Guests tasted food from around the world, visited replicas of famous landmarks and watched different cultural performances when they attended the 16th annual CCC cultural festival.

The theme of this year’s festival was “Unity” and featured 17 different countries. 90 students participated in the event, according to CCC president and senior Grace Quakenbush of Wall.

Quakenbush was pleased with the festival, and she said the countries were some of the best she has ever seen.

“I couldn’t have been happier with how the festival turned out,” Quakenbush said.

The countries were judged by CCC council members and teachers, based on a five-category rubric, according to Spanish teacher Karen Britto.

Freshman Marina Berger of Marlboro said Mexico was her favorite country of the night.

“They had so many food choices, and you can tell how hard they worked on the decorations because it felt like you were in Mexico as soon as you stepped in,” Berger said.

“I think the CCC festival is such a cool idea because we all come from different backgrounds and it is a great way to celebrate what makes us different,” Rau said.

Later that night, Rau performed the One Republic song  “I Lived” with the chorus club. She said the club chose the song because it discusses “overcoming challenges and life experiences.”

Berger thought the festival was a great experience, and plans on participating in, or at least attending, next year’s festival.

“The effort put into this event is what made it memorable for me,” Berger said. “Just all the decorations, food and performances really showed how much work was put into the festival.”

Spanish teacher and CCC advisor Sabina Campbell founded the club 18 years ago. Campbell said that at the festival, CHS becomes a “‘piece of peace,’” and “is like a balm for anybody’s heart.”

“My favorite part of the CCC festival is the magic that converts a high school into a piece of the world,” Campbell said. “There are lockers, but suddenly there aren’t anymore. Instead there is the Chinese Wall, or Machu Picchu or the Sydney Opera House. There is no politics, jealousy, commercial trade, hate or aggressions…I absolutely love it!”