From autos to the arts: faculty recalls CHS’s history 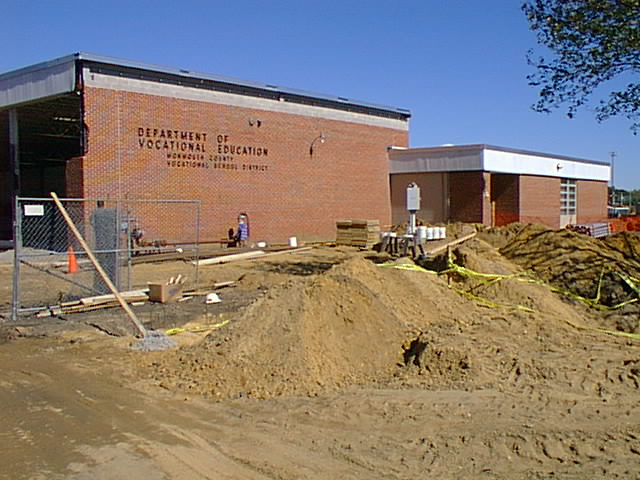 According to Pricipal James Gleason, this photo was taken in 1999 when the Wall High School vocational building was under construction. This photo, Gleason thinks, is room 105 in the early stages of its construction. Today, the building is home to the students, teachers and classes of Communications High School.

Before the back hallway of CHS decorated its cinder block walls with detailed murals, it was the single hallway of Wall Township’s Vocational High School. The rooms now used for mass media, art and print production once housed automobile body, electricity and automobile painting shops for students in a shared time program at Wall High School.

The original rendering of the building from the 1960s hangs in the back conference room, next to a rendering of the current building from 1999, just before CHS opened its doors in 2000. The original is at least half the size of the new school, but the essence of the former structure can be seen in the windows near the ceiling in the front rooms and the door closest to Wall High School, which used to be the front entrance.

“Back in the day the vocational high schools were owned by the individual high schools… this building has always been here,” Clevenger said. “It was everything. There was carpentry, electric, plumbing, beauty culture…”

The property presented itself as an ideal place for CHS to be built, as the space already lent itself to some fields of study intended for the future vocational school.

“There were two programs that were in the building at the time that kind of fit in with what we were doing as far as a theme,” said Principal James Gleason.

One of these is the print production room at the far end of the front hallway, which was a part of Wall’s vocational program decades ago. While the printing equipment has been long since updated, the structure of the original room remains. At the other end of the hall, room 109 is filled with art supplies and computers, while it once was a space for visual communications as a part of Wall High School’s program.

A far cry from the original single hallway, CHS hosted its first class in 2000 before the rest of the building was even complete.

“The Fitness center wasn’t done till December, all the classrooms upstairs were done, so classes were held upstairs, the whole downstairs wasn’t done yet,” Clevenger said.

While many students today decide to come to CHS after setting foot in the TV and radio studios during an open house, the studios were not available to the very first CHS students for some time.

The building that is currently home to writers, programmers and artists alike upholds its ongoing legacy as a vocational school for students to explore various career paths. Twenty years after construction was completed, Gleason thinks that while the school could use a few more bathrooms, there is not much he would change.

“I think the school itself is flexible enough to change as we move forward,” Gleason said. “So I don’t think we really need to change anything around here.”