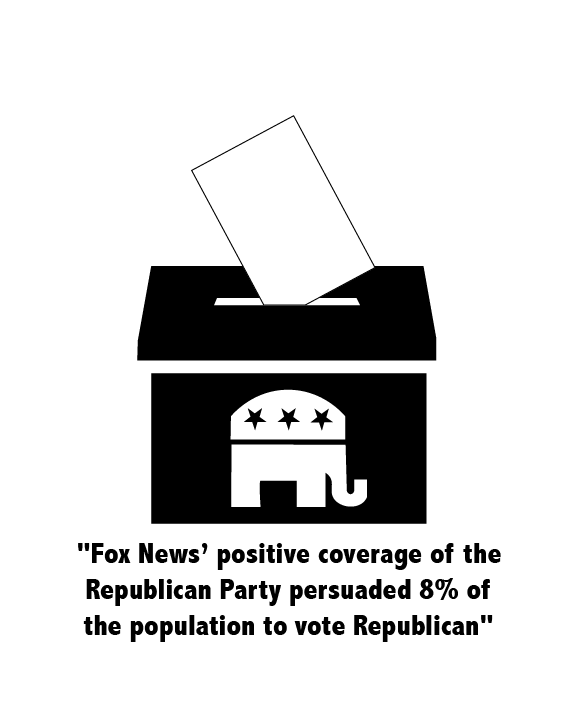 A study titled “The Political Impact of Media Bias” by UC Berkeley and Stockholm University researchers found that in 2007, Fox News’ positive coverage of the Republican Party persuaded 8% of the population to vote Republican.

At the time of what the New York Times called “the most controversial and dividing presidential election”, I was twelve years old. Despite doing all the trivial things a middle schooler would do, such as homework and  soccer practice, I was also deeply invested in the debates occurring in our country.

Before school, I would come downstairs and take a seat on the couch next to my mom and watch Fox News. Then in the evenings, I would go to soccer practice and have my own debates with fellow twelve-year-olds.  Due to receiving a bulk of what I learned either from my parents or Fox News, I took the side of Donald Trump in these playful debates, whereas my teammates took the role of Bernie Sanders or Hilary Clinton based on the news media they were consuming in their homes.

Although news is so readily available through a variety of platforms, like newspapers, websites, television and social media, it is difficult to find accurate information because of the significant use of media bias.

A study titled “The Political Impact of Media Bias” by UC Berkeley and Stockholm University researchers found that in 2007, Fox News’ positive coverage of the Republican Party persuaded 8% of the population to vote Republican. Because 198.6 million American citizens voted in the election according to the United States Census, that means approximately 16 million people voted Republican due to media bias.

Media bias prevents American citizens from living in a country that prides itself on being a democracy and thrives on the choice of the people: a promise made in the American Constitution.

Just as my twelve-year-old self was invested in debating during water breaks or any interim during practice, teens are exceedingly interested in politics and the world around them, according to New York Post. Greta Thunberg, a prominent climate activist, and Emma González, a survivor of the Marjory Stoneman Douglas Shooting and gun control activist, are defining figures of student and teen involvement in politics.

While history teacher Thomas Ross, said that he alternates between watching CNN and Fox News to receive unbiased news information, as students we should not have to do the same.  Sifting through coverage from a variety of news organizations in order to find accurate recollections of major events or claims that were made should not be the responsibility of any citizen let alone a student.

It is admirable that the youth of America puts time into furthering their understanding of the political system. But it is the responsibility of news organizations to supply the masses with unbiased, accurate information in order for all people in America to vote, become informed and make educated decisions.