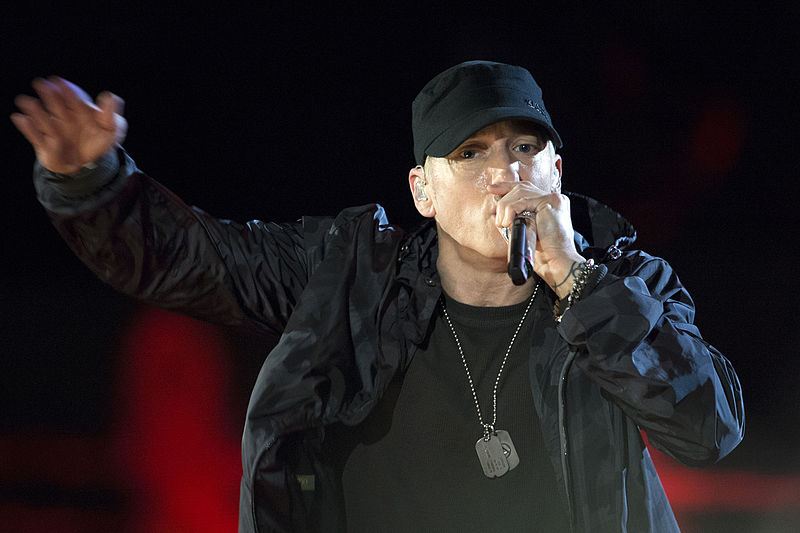 On Jan. 17, one of the best selling artists of the century surprised listeners with a new, 20-song album. The release of “Music to be Murdered By,” the 11th studio album by Eminem, left many conflicted, asking: who wants a new Eminem album in 2020? https://creativecommons.org/licenses/by/2.0/

Luke Latorre and Will McHale

On Jan. 17, one of the best selling artists of the century surprised listeners with a new, 20-song album. The release of “Music to be Murdered By,” the 11th studio album by Eminem, left many conflicted, asking: who wants a new Eminem album in 2020?

While “Music to be Murdered By” is easily Eminem’s best album in almost ten years, it shares many of the same shortcomings its predecessors had.

Thankfully, Eminem seems to embrace aspects of the current sound of hip-hop, which makes the album more palatable for casual listeners. His collaborations with younger artists gives the album a more fresh feel along with the fair number of well produced songs. This is likely driven by the return of Dr. Dre as his executive producer. These improvements over his past few albums show that Eminem is paying more attention to what his listeners want. However, this attention is also a shortcoming of the project in many ways.

In contrast to the carefree attitude he portrays, Eminem seems to be trying to please listeners in different ways with each album but does not truly know what they want out of his music.

“Music to be Murdered By” is somewhat of a balance of his offensive style and his more personal side. It also executes these styles more successfully than his past two albums, but this mix of the two only makes it harder to justify the project’s existence.

Eminem could most likely fill a niche in hip-hop by fully embracing one of these styles, as the high points on the project are great moments that leave the listener excited for more. On “Godzilla,” Eminem teams up with Juice WRLD and does an excellent job of being extreme, offensive and entertaining. In songs like “Darkness,” he tastefully talks about the issues of gun control and mass shootings in a way that only he truly could. While both songs received a somewhat positive reception from fans and critics, their conflicting tones make the project and themes less poignant.

When Eminen highlights the problems that lead to domestic terrorism on one song but then says “ I’m contemplating yelling ‘bombs away’ on the game / Like I’m outside of an Ariana Grande concert waiting” on another, it serves to lessen the impact that either would have on the listener. This creates a dichotomy that would be comparable to a fossil fuel executive talking about how great renewable energy is.

While much of the album is promising, featuring great production, skilled flows, creative lyrics and solid features, Eminem continues to hold himself back from following through with another admirable album. He shows on this project that he could find great success in either going all-in on mature, introspective songs or childish, fun records, but the amount of interest people will have in Eminem trying to balance both styles seems to be running out.