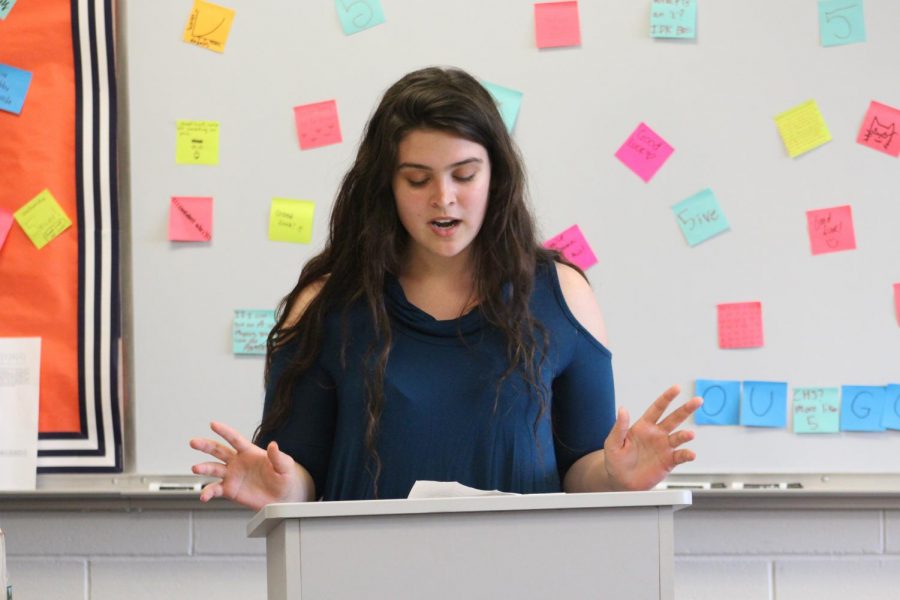 Senior Julia Rocco of Marlboro gives a speech during CCC elections in 2018. This year, the way that the club will pick a new council will be different due to COVID-19.

On April 16, Governor Phil Murphy announced the closure of all New Jersey schools through at least May 15 due to the coronavirus pandemic. For CHS, the end of every school year is typically filled with in-person club elections for the upcoming year. Due to the indefinite closure, some of these clubs have to develop a plan of action to prepare for not returning to CHS in May or June.

Every year, the Student Government Association (SGA) goes through a thorough election process. Candidates are able to give speeches and tell students why they should be elected in person. SGA President and senior Liam Jamolod of Howell explained that the procedure to elect the 2020-2021 council needs be different now.

“We would start with a brief interest meeting on Google Meets for those interested,” Jamolod said. “If there is a large amount of people running we would do a quick Google form to the school as primary… Then around the third week of May we would release speech videos they record and voting will take place online…”

Other clubs at CHS, such as Radio Club, seem to be taking a similar approach. Radio Club General and senior Michael Landolfi of Tinton Falls said that he will “still feel confident” with the elected council despite the situation.

JSA decided to hold their elections in school in March. They held their elections early to democratically elect six council members, and then planned to decide their positions based on who performed the best in planning for their Spring convention. Due to the virus, the convention has been cancelled and the present council had to choose positions based on applications. According to JSA Co-President and senior Dane Tedder of Ocean, the present council is currently figuring out the actual council positions themselves.

As for the Cultural Communications Club (CCC), nothing is certain yet. The club is leaning towards the plans held by both the SGA and the Radio Club. CCC President  and senior Grace Quakenbush of Wall explained what the future holds for the club.

“We haven’t decided on anything yet…” Quakenbush said. “But we’re most likely going to have the candidates make videos, and then we’ll use a Google form.”

Senior Jamie Nickerson of Tinton Falls is the president of Photo Club and director of Drama Club and says that they too will be utilizing video conferencing and online forms to decide the leaders of the club next year.