Club opts for different format in light of new challenges, such as no more breakfast sales 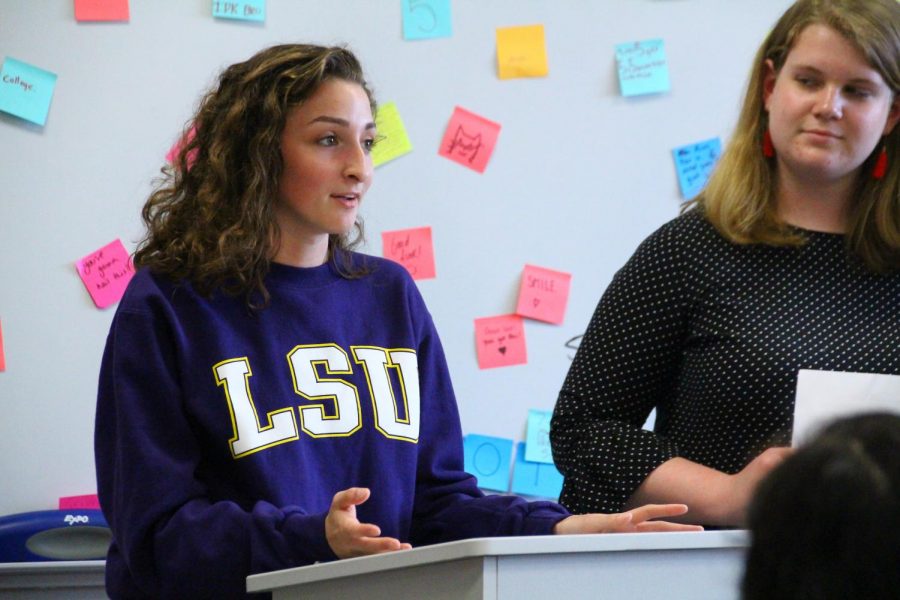 Senior Adriana Poznanski of Middletown giving her speech at the CCC council election in 2019. This year, the club had to conduct this process virtually.

The Cultural Communications Club (CCC) announced their 2020-2021 council on May 1 via email from president and senior Grace Quakenbush of Wall. The COVID-19 outbreak has changed many aspects of CHS life going beyond just online classes even to affecting clubs; this year’s SkillsUSA competitions were canceled, the Drama Club can no longer perform their show as planned, and in regards to the CCC, elections were held through an online forum.  But with the prospect of reconvening next school year, current club leaders have to figure out their successors.

Spanish teacher and CCC adviser Sabina Campbell recognized that CCC was among many of the clubs at CHS whose election process needed to change.

“The circumstances for these elections were very different. We feel that next year may be really difficult concerning fundraising and community activities,” said Campbell.

In past years, candidates made speeches in front of the club and whoever had the highest number of votes became president, then vice president, and the four other candidates with highest votes are assigned council positions. This year, each candidate wrote a short paragraph, which were sent out to the club on April 27 along with a form to vote.  The council then had the top eight candidates write essays on what benefits they could bring to the club, and the council selected their top six assigned the positions from there.

Next year’s council might have to face uncharted territory as Quakenbush fears that the club might not be able to sell breakfast sales, a precautionary measure that may be put in place as a result of the outbreak.

“Next year we might not be able to have breakfast sales which are CCC’s biggest fundraiser,” said Quakenbush.  “We really wanted to have a more hands-on approach to picking a council because next year is really going to throw a curveball.”

Co-President elect and junior Dani McLaughlin of Tinton Falls believed the council’s method to the election was fair but surprising.

“The process was executed really well by the council. Still, I’m definitely surprised at the positions that people were assigned.” said McLaughlin.

Despite the uncertain future, both Quakenbush and Campbell are nothing but confident that the new council will be successful in the coming school year.