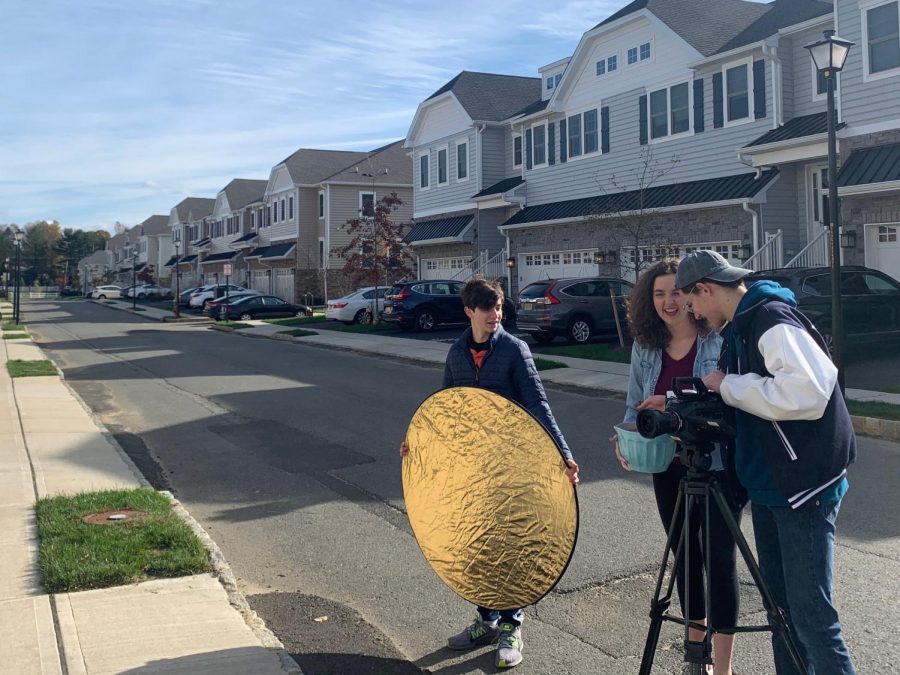 Freshman Aaron Diament of Manalapan, senior Tess Rempel of Spring Lake and junior Steve Ostrom of Lincroft worktogether to set up a 48 hour film challenge for the DV club.

From music and art to the people at CHS, student filmmakers are able to find inspiration everywhere.

Junior Meagan Ellis of Freehold said that her inspiration has come from all of the new people that CHS brought into her life. Ellis has found that the experience of coming has helped her to become open to new opportunities and learn the stories of the people around her.

“It wasn’t really a moment specifically, but just being a part of CHS and getting to meet really cool and interesting people and getting to know them,” Ellis said.

Senior Vaughn Battista of Tinton Falls explained that instead of experiences, his emotions dictate a key role in his films.

“I want someone to understand how I’m feeling, and I can do that through some audio-visual combination of something,” Battista said.

He said his films are realistic human dramas and tend to focus on the theme of alienation.

“It’s the medium for me to express myself that to me just makes the most sense,” Battista said, explaining how his film style is his version of conveying his emotions.

Senior Nick Chunn of Tinton Falls said that getting a message across is one of the things that draws him to film.

“I can give an important message or piece of myself to the world in a form that you wouldn’t exactly expect,” Chunn said.

He is often inspired by other filmmakers such as Paul Thomas Anderson and Darren Aronofsky, who both are experimental creators like himself.

“Even if it is a traditional narrative I like to try experimental styles and mess around with some Avant Garde things,” Chunn said.

Sophomore Kara Petrosino of Colts Neck, however, tends to focus more on the theme of youth in her films.

“I’ve noticed that a theme I usually stick to is the preservation of innocence and a childlike imagination and mindset,” Petrosino said.

She also explains that her inspiration for films often comes from her imagination instead of concrete things.

“I think music is something that inspires me a lot for film because I’m able to take that which is something I can hear and imagine it more visually and tell a story that way rather than just through the audio,” Petrosino said.

She also said that the aesthetic of artwork she finds, like drawings or paintings, inspire her.

In the end, CHS filmmakers use their creative skills along with everyday inspirations to bring to life the messages that they want to spread.

“I think being a filmmaker is all about having something to say, whether that’s about the world or that’s about yourself,” Battista said.