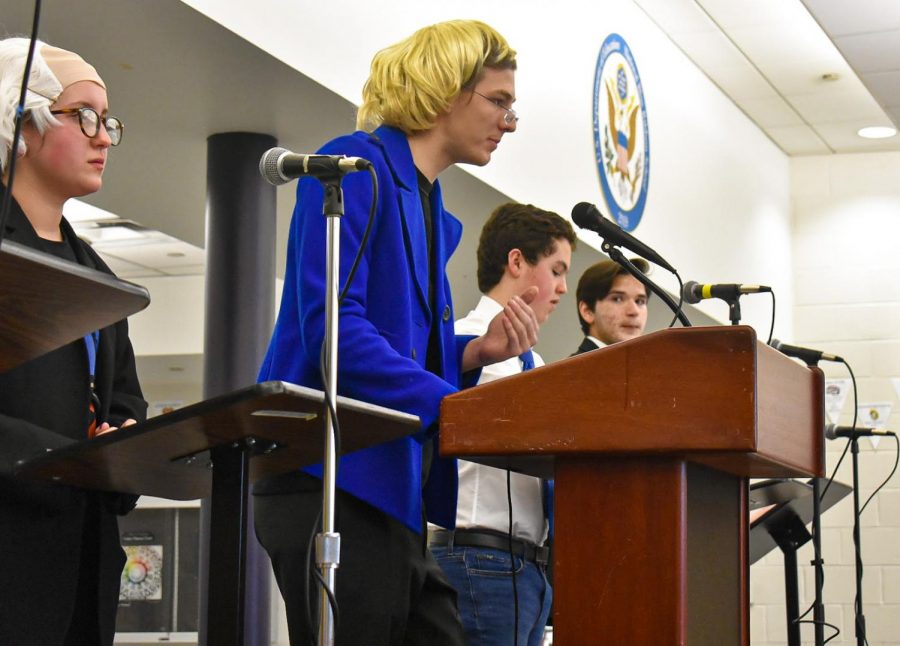 The Junior State of America (JSA), which held the mock Democratic primary debate shown here, is one of the clubs not able to officially continue this school year.

COVID-19 has taken a toll on society, leaving people trying to find a way to assert a new normal in a world that is anything but that. With the start of September, CHS and schools all around the world have been trying to discern what will be best for their students and staff this school year. Throughout this process, schools had to make difficult decisions, including delaying the approval of clubs.

As of Sept. 18, the only approved clubs at CHS are the National Honor Society, The Inkblot, the Student Government Association, Yearbook and all class councils.

While some may interpret this as meaning all other clubs are cut, CHS Principal James Gleason stated that this is not the case.

“I wouldn’t necessarily say [club] cuts. There’s a delay,” Gleason said. “I understand that it certainly could be interpreted as cuts because those other clubs aren’t approved right now… It’s just that they are not approved, it doesn’t mean that they aren’t going to become approved.”

Gleason went on to say that the delay was due to the uncertainty that defines the upcoming school year.

“I think that the Board of Education is taking just a careful approach. Obviously, it’s a commitment to funds once they do approve it. They are just waiting to see how school is going to open, is it going to stay open, you know just all those different questions,” he said.

For now, the clubs that have not yet been approved are continuing to find ways to keep their members involved.

The Cultural Communications Club (CCC), one of the largest clubs at CHS in years past, is among the many unapproved clubs thus far. However, co-president and junior Dani McLaughlin of Tinton Falls, said that the CCC will continue to make sure that their objective of helping the community never ceases.

“We plan on staying in touch with organizations we’ve worked within the past as well as some new ones to keep track of volunteer opportunities available to students,” McLaughlin said. “We want to find a way to let everyone know about them, whether it be through CCC or already approved clubs.”

On the contrary, clubs such as The Commons, the literary magazine at CHS, cannot work around their current status.

Co-Editor In Chief and senior Steve Ostrom of Middletown said that while The Commons would like to try and work through this, it will be almost impossible without any approval.

“We are definitely going to try and figure out ways to work virtually, similarly to last year during the shutdown, but it’s still a big work in progress and we are not entirely sure of what we’ll be able to achieve without club approval,” Ostrom said.

With clubs being a vital component of life at CHS, it is understandable that many members of the student body and staff are disappointed at the news that some of their favorite clubs may not be operating during the beginning of this school year.

“While it definitely makes sense in the troubling times, it’s very unfortunate to see that so many clubs didn’t get approved since many of them hold the hearts of the population of CHS,” Ostrom said.

Gleason also explained that the Board of Education understands how important clubs are to students, and it is not permanently saying “no.”

“They certainly see that clubs are very important for the students and they are going to wait and see how this school year starts to unfold,” Gleason said.

The Oct. 9 issue of The Inkblot erroneously reported that the CHS chapter of the Junior State of America (JSA) was among the clubs approved by the district thus far. The story has been changed above and there will be a correction statement published in Issue 2 of the paper.