The problem with reality TV 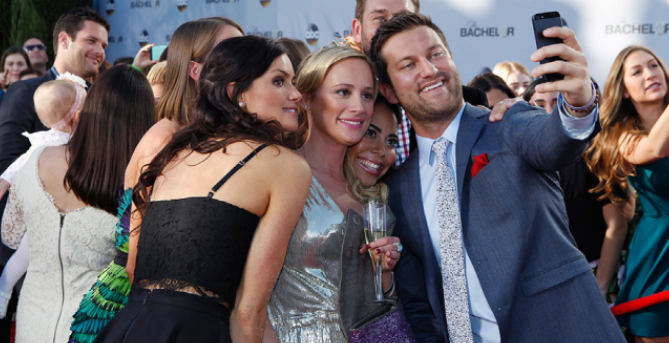 Cast members of “The Bachelor” pose at a red carpet event.

Reality television — one of the most popular forms of entertainment, typically characterized by drama and vulgarity, brings in millions of dollars each year. Viewers tune in every week to catch up on their favorite shows while they root for their favorite contestants. But what is it about reality TV that attracts so many different groups of people?

There is a psychological reason as to why so many people tune in to their favorite reality TV shows every week. According to Business Insider, viewers love to react to fictional drama and may have a “voyeuristic” desire to view others in embarrassing moments. Because of this, networks continue to produce and release new reality shows to bring in revenue. According to Vox, 750 reality television shows aired in 2015 alone.

While its increasing popularity generates millions of dollars each year for big networks and top producers, its so-called “lighthearted” entertainment can negatively effect young viewers.

The problem is not with lighthearted competition shows like “American Idol” or “America’s Got Talent,” but rather shows such as “The Bachelor” and “America’s Next Top Model,” based around drama and geared toward young women.

“The Bachelor,” which first aired in 2002, currently has 24 seasons and was renewed for a 25th. According to Kantar Media, “The Bachelor” brought in $86 million dollars in 2017. Viewers tune in to watch 30 women date a single bachelor who has to eliminate the women one-by-one via a red rose until he finds who he wants to marry.

This show has continuously been criticized for its lack of racial diversity and perpetuation of gender norms. In a way, it tries to normalize women viewing each other as “competition” for a man’s attention. The popularity of this show comes from its infamous “catfights” between the contestants and the drama that ensues. However, it only reinforces harmful female stereotypes, like the idea that women are emotional and over-dramatic.

“America’s Next Top Model (ANTM),” which brings in millions of dollars and viewers each year, films young aspiring models competing for the title of “Top Model” and trying to kick-start their career in the industry.

The premise of this show profits entirely off of eating disorders and the body dysmorphia of young women, emphasizing that in order to succeed in modeling, you must look a certain way.

Cassie Grisham, a contestant during Cycle 3, developed bulimia as a result of the show and the industry she was working in.

“If I didn’t want to be a model, I would eat whatever I wanted to and not worry about it,” Grisham said. “I have this will to be skinny. And if people have a problem with it that’s their problem, not mine.”

Contestants are constantly shamed for “eating too much” or “letting themselves go,” which can be very triggering for young girls watching the show, who equate their self worth with a number on a scale. In fact, it was not until season 10 that the show featured a medium-sized “Top Model.”

While some reality television shows can be entertaining, shows like “The Bachelor” and “ANTM” promote harmful stereotypes about women and stress the importance of outer beauty. When young impressionable viewers watch these, it can be hard for them not to develop the mindset that beauty is based on how men perceive women and accept that they have to look a certain way.