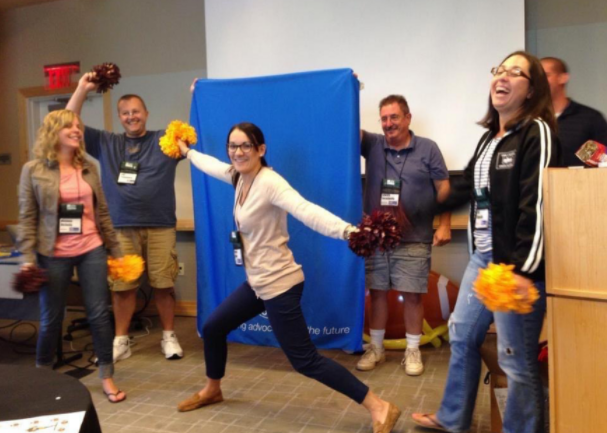 Wheeler participates in an exercise at the Nov. 2014 NJEA Convention in Atlantic City, NJ.

The New Jersey Education Association Convention has been canceled only twice in its more than 100-year history – once during World War II and again during Hurricane Sandy. Though the convention was not canceled a third time due to the pandemic, it was held virtually for the first time: and saw its highest attendance than ever before.

“Making this decision now allows us and our partners to focus on providing a virtual convention that lives up to the high standards we have set over the last century,” said NJEA President Marie Blistan in a statement on njea.org. “We will do everything we can to ensure that our members have the professional learning resources they value even in a new format.”

Normally held in Atlantic City, this year the convention took place via Zoom from Nov. 5-6. CHS students enjoyed a long weekend while teachers could attend the conference if desired. The MCVSD does not require teachers to attend the convention like some districts, especially due to the nature of the specific fields of some CHS teachers, but teachers are encouraged to go and improve their classroom skills.

CHS students were all virtual for the week of the convention, rather than Cohort A attending in-person on Monday and Tuesday as usual. Tuesday, Nov. 3 was Election Day, which contributed to the decision to make the whole week virtual, as Gov. Phil Murphy encouraged schools to go remote on Election Day.

“Because Wednesday is our typical remote day, it just made sense to make the whole week remote because then we would’ve had an imbalance in our cohorts,” Principal James Gleason said.

According to chemistry teacher Erin Wheeler, much of the convention focused on virtual and hybrid learning in lieu of the current learning adaptations. Wheeler, who serves as a chairperson on the Vocational Career and Technical Education Committee,  has attended the convention every year since the beginning of her career.

Wheeler added that the usual camaraderie and network expansion were absent from this year’s convention, as well as the vendors, colleges, and booksellers that usually attend to add to educational enrichment in New Jersey.

“It’s kind of a networking thing too, so you missed that as well,” said Wheeler. “Not as effective, but at least it was something.”

While the convention lacked usual in-person activities, the 2020 Keynote Speaker was Ruby Bridges, the first African-American child to desegregate a school in Louisiana in 1960, amid violent backlash. She has continued to fight for equal educational opportunities for children through her foundation, the Ruby Bridges Educational Foundation.

“If we are to get past our racial differences, it will come from our young people,” Bridges said during her speech. “But we, as educators, have to do our part.”