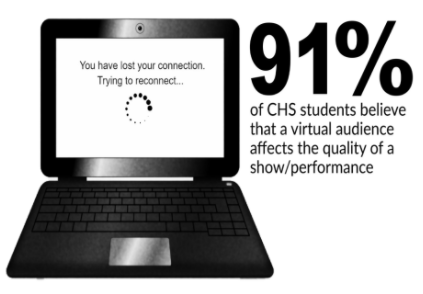 Jimmy Fallon is getting himself ready to do his show. However, he’s not in his regular dressing room. Fallon is sitting in his basement, showing his wife how to hold the camera.

Fallon, like many performers, had been doing his show virtually from home from March 17 to July 13. Directors, schools and organizers have been forced to cancel shows or make them virtual over the past few months. While it may appear normal to the viewers, performing virtually is not the same.

There are two vital parts to theater: the actors and the audience. Actors on stage draw energy and confidence from the reactions of audience members, making it hard for performers to adjust to this “new normal.”

Sophomore Danielle Lirov of Marlboro, who is taking part in a virtual play, touched on how much an audience helps a performance.

“Not being able to see peoples’ reactions I think makes me even more uncomfortable than being in a gigantic room filled with people,” Lirov said. “[I] feed off of the audience’s energy. When there’s a good audience, it changes the entire pace of the show.”

Many CHS students are learning to adapt to performing with no audience including sophomore Mary Jodry of Neptune City who talked about the struggles that came with hosting her yearly benefit.

“I found it honestly challenging to keep myself entertained enough to keep a high energy,” Jodry said.

Even the most well-known performers are experiencing this problem. In Jimmy Fallon’s first episode out of the studio, he mentioned how hard it was, between his kids being in the room with him and the striking silence after each joke.

Another late night television host, Seth Meyers had a similar opinion and had found the lack of audience as uncomfortable as Fallon did.

“We’re programmed to work in front of an audience and you don’t want to talk over laughs,” Meyers said in a virtual interview with Jimmy Fallon.

People are remaining hopeful about the future of performing. In an interview with Deseret News, Thomas Schumacher, the chairman of the Board of The Broadway League, mentioned his hope for the future.

“One thing is for sure, when we return we will be stronger and more needed than ever,” Schumacher said.