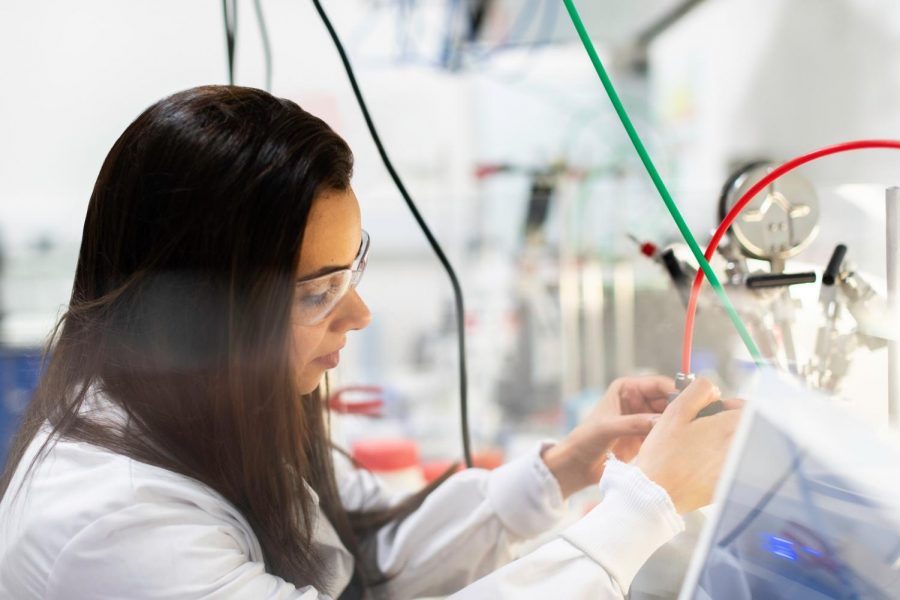 The low amount of women in STEM is discussed as being a side-effect of lack of support and confidence in the formative years of education. https://unsplash.com/license

Out of the five Monmouth County Vocational Schools, CHS is the only one of its counterparts that does not turn its entire focus to the field of STEM; the other four schools are wholly dedicated to the fields of either engineering, medical sciences or biology.

While CHS offers courses in the STEM field such as programming, physics, biology and mathematics, the focus of the school is mainly in communications and therefore has programs such as TV and Radio, Journalism and Graphic Design.

Additionally, CHS has a high percentage of female students, contrasting to the lower percentages of the other MCVSD schools. The National Center for Education Statistics reports that in the 2018-2019 school year that Communications High School’s student body was 71% female and only 29% male; the male population in the only non-STEM-focused school was significantly less than the male populations of its MCVSD counterparts.

Junior Caroline Nesci of Middletown recalls that when going through the MCVSD application process, CHS was not her first choice. Instead, she was most interested in attending the Academy of Allied Health and Science (AAHS).

“My reasoning for applying to CHS was that I could only apply to one school, and I did not think that with my test scores I would have been accepted [to AAHS],” Nesci said.

The New York Times reports that at age 14 — the approximate age that 8th graders apply to MCVSD schools — girls’ confidence levels are at an all-time low, while the confidence of boys of the same age was 27% higher. Possibly, this lack of confidence is significant in why the student bodies of schools such as High Technology High School or Biotechnology High School are 65% and 47% male, respectively.

Forbes Magazine found that 98% of women face at least one of the seven most damaging power gaps that prevent individuals from reaching their potentials, and 75% face even three or more of these at the same time.

Biology and health teacher Leah Morgan said that a lack of confidence could have developed over years of co-ed education, where females are not as dominant as males.

Despite CHS being the only non-STEM-focused school, some students still apply in hopes of entering a STEM field in the future. Sophomore Ayumi Sykes of Tinton Falls hopes to pursue a career in psychology.

In STEM classrooms, Sykes is confident in her answers. On the other hand, she notes that some of her female peers are hesitant about their answers, believing that they are inadequate at the subject.

Likewise, Morgan notes that there tends to be hesitation when it comes to participating in the classroom.

“I do see a lack of confidence in girls, and perhaps in math and science more so,” Morgan said.

Although the American Association of University Women recognizes that women only make up 28% of the workforce in STEM, programming teacher Laura Gesin suggests that this small percentage of women is not due to a lack of confidence, but rather from not being welcomed into the field.

“I think it takes encouragement to enter the space,” Gesin said.

Morgan also mentioned that the stereotypical gender gap is even more apparent in selecting STEM courses at CHS, possibly because of the difficulty level of the course.

“I will say that almost all the boys take physics, that if you were to ask Mr. Godkin, I would say his Advanced Physics class is far more boy-heavy whereas advanced Bio and Forensics are… more evenly split,” Morgan said.

Gesin mentioned that rather than attributing the amount of confidence someone has in whole to their gender identity, it is more in part to their personality. Despite this view on gender and confidence
being somewhat atypical, it creates a sense of hope for more women to make their way into STEM.

“While other teachers pay attention to that kind of thing, I don’t really think that the amount of confidence is a boy or girl thing.”