Is original art an abstract idea? 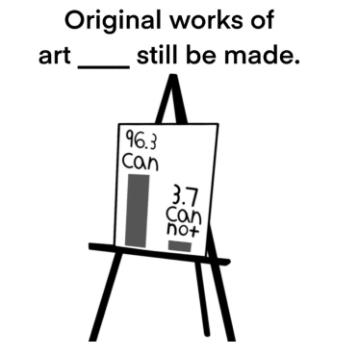 Students at CHS, many being artistically and musically gifted, would agree that art can be a means to portray oneself honestly. As freshman Anna Lindberg of Keansburg says, “I think the true purpose of art is to generally express yourself more.”

The discussion of art, however, raises a question. If art is fundamentally meant to be personal and unique, why does it often look or sound the same?

Most frequently, this complaint is voiced in music, especially modern pop. Two specific musical characteristics that pop songs often have are the “millennial whoop” and the four chords of pop. The “millennial whoop,” a phrase coined by the music blogger Patrick Metzger, refers to a certain pattern — a simple series of notes that alternate between the third and fifth notes of a major scale — usually sung in a “wa-ooh-wa-ooh” or a similar vocalization. It can be found in a large number of pop songs, from “Really Don’t Care’’ by Demi Lovato to “California Gurls’’ by Katy Perry.

Another common characteristic of modern music is that a lot of it is based on the four chords of pop. In the key of C Major, the four chords would be C major, G major, A minor and F major. This pattern can be transposed to any key. This famous chord progression has been used in pop music for decades, including “Let it Be” by the Beatles, released in 1970, “I’m Yours” by Jason Mraz, released in 2008, and thousands of other songs.

Music sampling is another technique that causes pop songs to sound like music from decades ago. This is the act of purposely reusing or manipulating sounds from previous recordings. Often, numerous songs will use the same or similar recordings of older songs, causing increased similarity with contemporary songs.

With these elements, it’s not surprising that much of music sounds similar. Popular songs now seem to be created of a specific formula, one that makes them very simple and repetitive. One may begin to think that music, and perhaps art in general, is simply losing its originality.

Nevertheless, easier access to music technology and cheap online publicity has led the independent music scene to boom. Nearly anybody who wants to produce and showcase music can do so. According to Spotify, there are over 1,300 music genres around the world, making the music scene today more diverse than ever before.

In fact, this can be said of all art forms in general; not just music. The visual arts have also grown in diversity and are sometimes more expressive and personal than they have been in the past. Although it may seem that modern art is similar, there has actually not been a significant decrease in originality in any of the art forms.

The emotion that the artist is trying to convey could also be responsible for the similarity among music and the other art forms. Human beings feel similar emotions and will generally express them in similar ways. Sad songs sound alike because they are resonating with the same emotion. Likewise, artworks that are of a certain genre, like horror or macabre, will look alike because they are conveying a similar message. But that does not mean that each song or artwork is not unique. People interpret emotions and beliefs differently, and even if many pieces seem similar, there is still the unique spin that the creator brings to their piece.

Freshman Khanh Le of Ocean Township has a different opinion as to why art often looks and sounds the same. She believes that although our surroundings affect the artistic pieces we create, the final product can still be original.

“I don’t think that art can be original, but that’s not a bad thing,” Le said.“You take in everything you see around you, take little bits and pieces and then remix it into your own thing. Even though it may not be made originally from scratch, the final product is still considered original.”