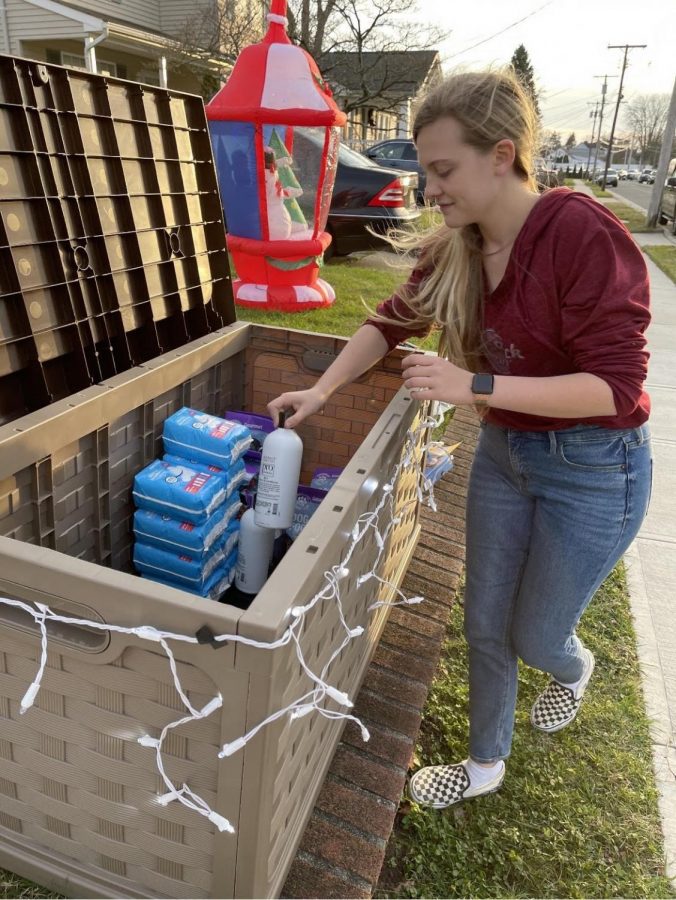 Jodry places a shampoo bottle in “The Giving Box,” a donation pick up and drop off service that she and her family run outside of her house.

Sophomore Mary Jodry of Neptune City has lived in the small town for her whole life, which has given her a tight-knit community and inspired her extensive work with charity and non-profit organizations. But in December 2020, Jodry took full leadership when she created “The Giving Box.”

Inspired by one of her neighbors who set up a mini food pantry in their front yard, Jodry’s “Giving Box” collects personal hygiene, and now, cleaning products in two boxes outside of her house. Jodry’s family made the first donations to the box and they refill it almost daily, so anyone who needs the products in it can come and take them without pressure to say anything to them.

“It’s like a self-running thing, so people will either donate stuff to my front door or they’ll just put it right in [the box] if they don’t want to have their name known, because that actually happens quite a lot,” Jodry said. “Some people give us cash donations
as well, and then anyone can come up to the box, take whatever they need.”

She further explained that people have also approached her family and asked for specific donations that they’re in need of. While they can’t guarantee these items, they do their best to fulfill these requests.

“For example, there was one woman who was really nice and her daughter had just started her first period and so she asked us to make a whole [feminine hygiene] kit for her, and we did,” she said.

Jodry used social media, word of mouth and even television interviews in order to spread the word of her donation box. ABC, CBS, Scholastic and News12 New Jersey have all spoken to Jodry and her family about their work, each of which has led to an influx of donations.

Jodry hopes to continue the “Giving Box” as long as possible, as its impact is evident and fulfilling.

“I think there’s a lot of stigma about people having to go to the government or go somewhere else to get help. And I think there’s something really nice about people just being able to feel comfortable,” she said. “I live in a small house, it’s not intimidating at all and a lot of people have come up to my door and just been like, ‘Thank you so much, like you really helped.’ And there’s something really rewarding about being able to feel like you’ve actually impacted someone personally.”