Reflecting on the year through a freshman’s eyes 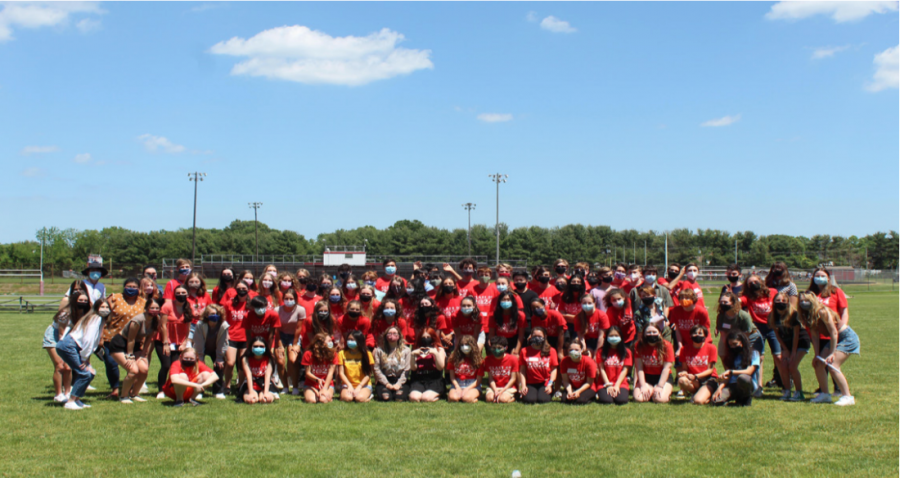 CHS class of 2024 poses for a picture during the freshman class meet and greet event after resuming full-time in-person school.

As COVID-19 traveled the world, the Class of 2024 felt unstoppable as they dominated the halls of middle school. Then, everyone watched helplessly as this dangerous disease trickled into the United States, New Jersey and finally Monmouth County.

A week before the shutdown, the Class of 2024 received their admissions decision to CHS. The excitement was overshadowed by the impending danger that came along with the first major pandemic in over a century.

As summer rolled on, measures were taken to engage the new students into CHS. Online orientations and discussions with upperclassmen did make many feel more welcome and comfortable.

“They were good. They were fun. But they weren’t necessarily helpful. It was the first time they’d done this and it was clear,” freshman Carl Smith of Fair Haven said.

When CHS Principal James Gleason reported that the 2020-2021 school year would start fully virtual due to “staffing issues,” any hope for a normal year vanished.

“I was still excited for high school but I felt a bit bummed out that we had to be fully virtual initially,” Bigley said.

Although the schedule did eventually adjust to accommodate students with in-person cohorts, Bigley noted the disconnect that lingered among the CHS freshman.

“I don’t really know as many people or have as many friends as I probably would have if it were a normal year,” Bigley said.

The freshmen have missed out on the true CHS experience, missing two in-person Spirit Weeks, Color Wars, countless clubs and classmate bonding. Who knows how long this divide will last?

Principal James Gleason once again made an announcement, sending ripples of exhilaration throughout the classroom. On May 11, the news that had long been rumored was released during third period: the cohorts were to be collapsed and fully in-person instruction was to replace them.

Finally meeting the other half of our grade is incredibly refreshing. Although we had never formally met face-to-face, meeting felt like a reunion after months of dark screens and the only association with a person’s name was their profile picture.

Hope has once again filled the halls of CHS. The promise of an end to this pandemic, salvation by vaccination. We, as freshman, look forward to the sense of normalcy that will return to CHS as this year ends and the next one begins. We are anxious to get a better feeling of the school we have come to love over this unprecedented year and finally be able to embrace the experiences we have waited for.