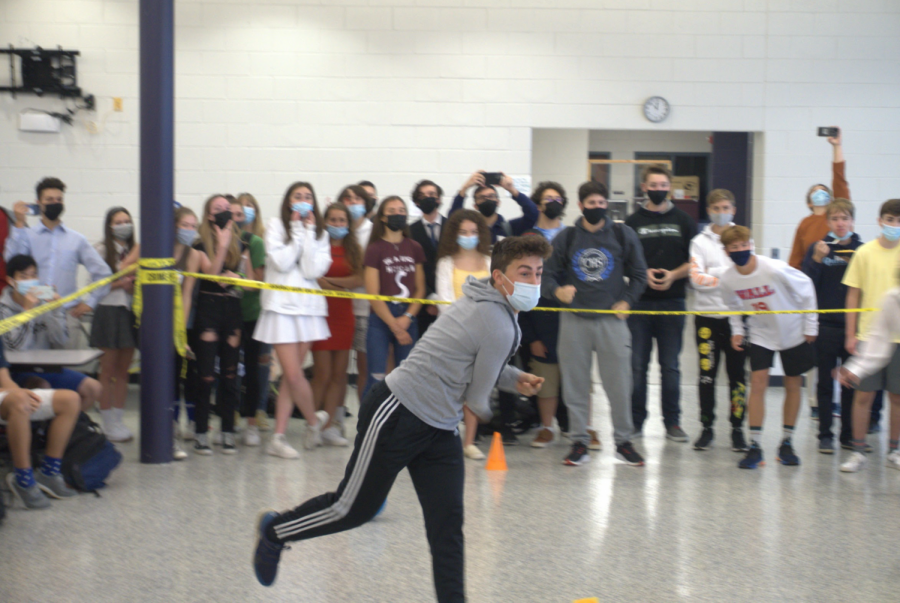 PHOTO COURTESY OF Inkblot and Yearbook

Junior Joey Esposito representing the class of 2023 in dodgeball.

When students filed into Communications High School on the morning of Tuesday, October 26, Fall Spirit Week was well underway. The events of the day before – which included a scavenger hunt and Make-A-Monster – ended with the juniors on top of the leaderboard, followed by the sophomores, seniors and then freshman.

Today’s theme was Dynamic Duo Day, and the cafeteria appeared to be a sea of the most iconic pairs. Some noteworthy pairings included Velma and Daphne, devils and angels and Cruella de Vil with a Dalmation.

After all of the duos had been counted, points were tallied up and the Class of 2023, the current juniors, had the most participation. This added more points to their already large total.

As CHS students stumbled off to first period, many were filled with anticipation for the events to take place later, during lunch.

After the sophomores finished their PSAT testing, the daily scavenger hunt was able to begin. As soon as the list was released, chaos ensued. Students ran up and down the stairs between each of the hallways trying to get a grasp on a variety of items from towels to origami cranes. In the end, the juniors had the most items, which helped push them even further into the lead. The sophomores were in second place, trailing behind by only a few points.

When the scavenger hunt came to an end, crowds began to assemble in the back of the cafeteria to watch the highly anticipated dodgeball games. Each grade had a team of six students with three boys and three girls.

The first game was between the juniors and freshman after the SGA picked the matchups out of a hat.

After a quick defeat, the freshmen retreated to the outside of the ring, and the sophomores and seniors entered for the second game. Although this game lasted a little longer than the first, it eventually came to an end with a clear victor – the seniors.

To determine third place, the sophomores and freshman played in a redemption round. The teams were evenly matched, and the advantage frequently shifted sides until the last freshman was eliminated. This left the sophomores in third place.

The juniors and seniors were both fighting for first place in the last round. The blue foam balls were whipped back and forth, but the seniors were eventually unable to keep their players in the game.

“It felt really good to win because I know how much excitement our grade got from winning last year’s Spring Spirit Week so hopefully this win will help propel us to win back-to-back Spirit Weeks,” McGrath said.

McGrath also threw the game-winning ball, a hard curveball straight into the lone-standing senior. He said that his “…throw had to be perfect. It’s dodgeball, one bad toss can cause the tides to turn in any game and we couldn’t afford that.”

For this win, the juniors received an additional twenty points, giving them a total of 115 points for the week so far. Winning a majority of the day’s points put them in a safer position for the days to come. The sophomores are in second place with 78 points, followed by the seniors in third place with 71 points. The freshmen are in fourth place with 46 points.

Tomorrow is Country versus Country Club Day, and lots of points are still up for grabs.