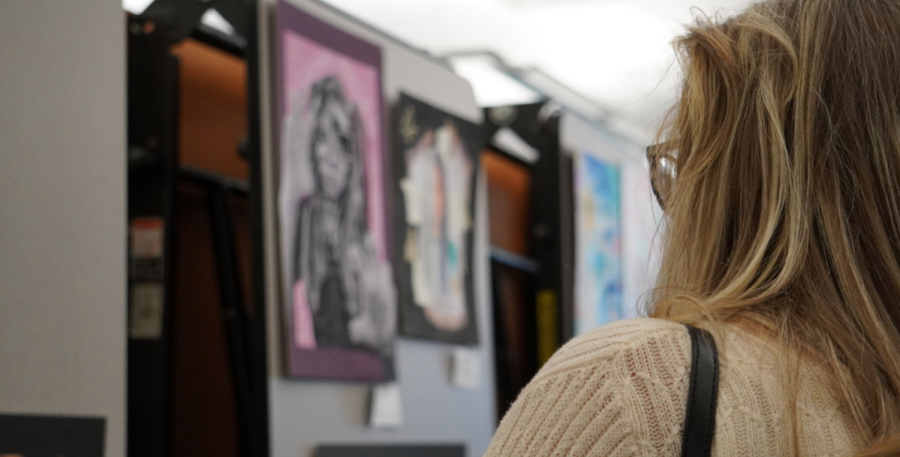 CHS’s cafeteria has long been host to a multitude of events, and it was no different on April 28, 2022 as the room was studded with tables and desks displaying a myriad of student artwork. Though hardly the Louvre, the uniquely creative display formed a whirling maze of color for parents, teachers and peers alike to observe throughout the night.

MCVSD Director of Curriculum Kelly Harmon stepped in for Principal James Gleason, speaking intermittently to emphasize the importance of these institutions to the CHS community.

“It was a great ceremony and an honor to be able to be inducted into this prestigious society,” said sophomore Quill and Scroll inductee Emma Makin of Marlboro. “I loved being able to walk around afterwards and look at the art as well.”

While CHS also hosts its own chapter of National Honor Society, NAHS and Quill and Scroll highlight student proficiency in more precise subjects.

Students inducted have shown particular excellence in art or journalism – NAHS members participate in regular workshops themed around different mediums of art and design while Quill and Scroll members contribute their work year-round to the yearbook or the newspaper.

The art show itself was not to be overshadowed by the induction ceremonies. Displays ranged from award-winning photography from Fitzpatrick’s photo class to a recycled outfit from the Junk Kouture contest.

Product packaging from Ortner’s Illustration and Design class, galleries of AP Art classwork and even the Animation class’ virtual creations were put on show.

Junior and NAHS council member Ashley Skarbek of Spring Lake Heights reflected on how the show gave students the chance to see talent from other grades.

“I thought the show was a good way to see what everyone is working on. Whether it’s personal work, from AP courses or electives, it was really cool to see everyone’s styles,” Skarbek said.

Gesin has been running the Art Show with Ortner periodically since 2011. She believes this year’s exhibition was one of the best shows the NAHS has organized.

“I think I can speak for Mrs. Ortner too because we talked about [the show] a lot afterwards, but it was perfect,” Gesin said. “The timing was perfect, the amount of art that we had out was really good, all the juniors really jumped in to help break it down fast and everyone really cooperated.”

Ruth Crawford and Alex Kinsey contributed to this article.