Just for fun: students not fooled by Mayan myth 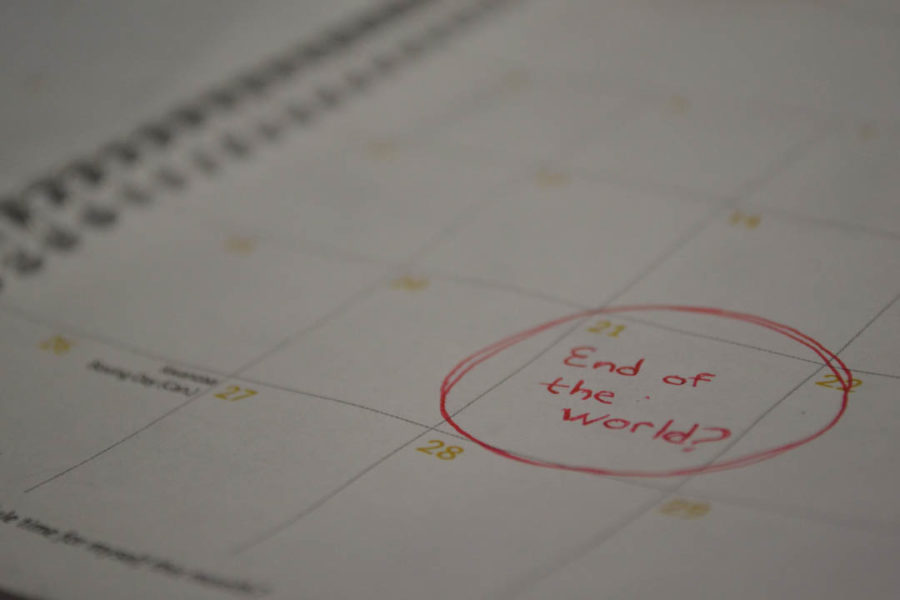 Does everyone remember Y2K, when civilization was destroyed by a computer glitch? I’ll be honest: I don’t. I wasn’t even five years old at the time. But I assume you remember May 27, 2012, when Jesus returned and gave his final judgment, and sent us to either heaven or hell. That was just a few months ago. And now, this Friday, it’s going to happen again. The world seems to be ending an awful lot these days.

A rumor has been circulating for several years that the ancient Mayan calendar predicts that the apocalypse will occur on December 21, 2012. It is only loosely based on fact, and comes as one of an endless parade of apocalypse scares that have been occurring for thousands of years.

The abundant media coverage makes it seem as though everyone is going into a panic over the rumor, but this is just another instance of the well-loved media tactic of blowing things out of proportion to add drama to coverage.

The original intent of this column was to talk about why the “prophecy” is a western falsification. It was going to reference Mayan leader Felipe Gomez, who called it “folklore-for-prophet,” and “twisting of the truth,” in an interview with Agence France-Presse.

It would have explained in depth how, according to MSNBC, December 21st merely marks the end of a cycle known as the Long Count in the Mayan calendar. Since it’s cyclical, the Mayan calendar will only be ending in the sense that our modern Gregorian calendar ends on December 31st of every year.

But, thankfully, I don’t have to go into depth about any of that, because a recent survey of CHS students showed that most of them don’t need to be persuaded. Of 130 students surveyed, only 14 admitted to having any concern about the world ending, and many of those who did not believe the myth included the aforementioned arguments in their comments.

Outside of that, the most common sentiment was frustration.

“I am tired of listening to all this craziness. I think that there is enough going wrong without people going insane about the world ending,” commented one anonymous student.

Students also expressed worries of others committing acts such as suicide and quitting their jobs due to misplaced beliefs.

The survey confirms something that has become apparent in the past few months: people are convinced that everyone else is worried about the Mayan apocalypse, when, in reality, only about 11% of people really are, at least in the CHS community.

Still, it’s a hot topic of conversation both in school and on the news. Even though we know it’s just a rumor, it’s part of human nature to enjoy the excitement and the novelty of the situation. It provides something to talk about and gives an excuse to throw an “end of the world party.”

“People are just looking for a way to add excitement to their lives,” junior Andrew Goudsward summed it up, shrugging.