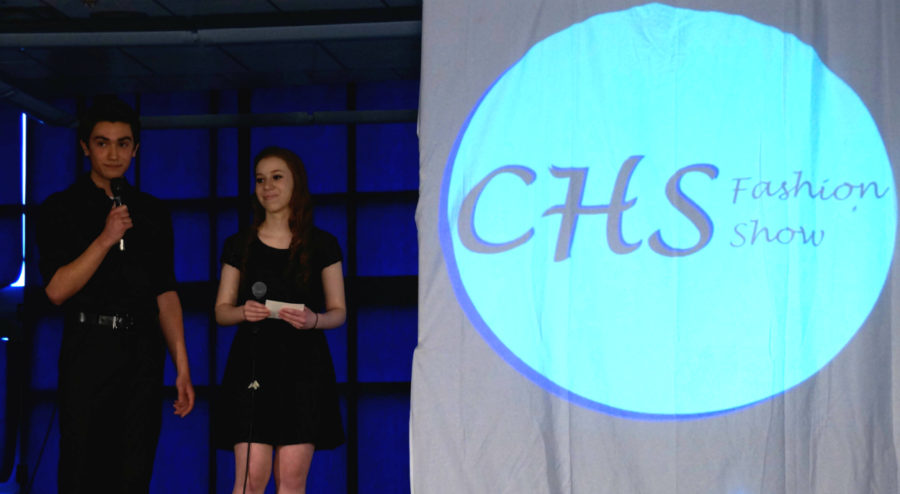 The second annual CHS Fashion Show was held on Friday, April 17 from 6:30 to 9 p.m. in the cafeteria. The proceeds from the event, conceived and coordinated by junior Sallie Haas of Deal, will go toward the cost of this year’s prom.

The event raised between $1,300 and $1,400 through the sales of tickets and food donated by local cafes and bakeries, including Joe Leone’s, The Macaroon Shop, and Dough Co., said Haas.

Haas and senior Max DeGeorge of Ocean served as the hosts of the event. Models from all four grades showcased clothing from a variety of local stores, including Lucki Clover, Inlet Outlet, Rare Cargo, Spellbinders, The Bee, Elite Boutique and Tuxedo Den. The group of over 70 models included students, faculty and children of faculty, according to Haas.

Among these models was freshman Felicia Aschettino of West Long Branch, who wore clothing from The Bee. She said she appreciated the opportunity to interact with other students.

“I got to meet new people in other grades,” said Aschettino, “plus I got to go to The Bee”.

The Bee had some of the most expensive outfits of the night, with some ensembles totaling over four hundred dollars, Haas said. Due to the cost of the clothing, every model was asked to sign a form agreeing to pay for their outfits should they be damaged.

Freshman Cole Raymond of Middletown modeled for the prom showcase. Like others, he enjoyed the chance to wear fancy clothing, and described it as, “fun because I like dressing up. ”

Many students were involved behind the scenes to make sure the show ran smoothly. Sophomore Shannon Bradley of Keyport styled hair for many models.

“It was really interesting,” said Bradley. “I really enjoyed watching everything come together and seeing how everyone came together to create something really cool.”

Biology teacher and Class of 2015 adviser Leah Morgan advised the event. Haas said she was the key to the success for the night and provided supervision throughout the entire process.

“It was a very positive experience,” said Morgan. “Sallie is amazingly organized … It was a very easy and rewarding thing for a teacher to do.”

Junior Kacey Cielecki of Spring Lake Heights modeled for Rare Cargo and said she enjoyed the show’s fun atmosphere despite her pre-show jitters.

“At first I was a little nervous. But then I realized that everyone was a little anxious, and that it was all for fun, so I enjoyed myself more after that,” said Cielecki.

The fashion show first debuted at CHS last year when its proceeds went toward the Photo Club’s trip to Photoshop World. Sallie said the event is now annual, and Cielecki said she looks forward to participating in the future.

“I will definitely be doing it next year, hopefully with even more of my friends”.