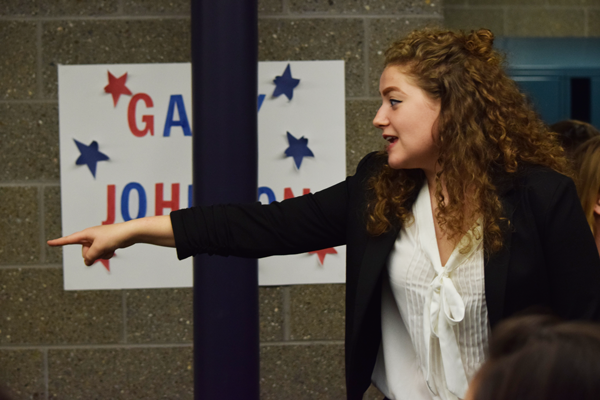 Jill Stein, the candidate for the Green Party, held her first rally on Oct. 21. In the CHS mock election, junior Zoe McDonnell of Middletown is representing Stein. Junior Veronica Yaron of Little Silver represented Ajamu Baraka, Stein’s running mate. At the rally, McDonnell introduced Yaron, who spoke on several of the Green Party’s policies. She addressed issues such as marijuana legalization, gun control, education and immigration.

“Our economy dropped because of the tomatoes… We [have] 50 states people… [Alabama] went down, and our economy dropped. Look me in the eyes. Tomatoes are important,” Yaron said. Overall, the rally informed many on Jill Stein’s beliefs and entertained a crowd of CHS students.

However, this was the Green Party’s only rally. The time allotted for their other rallies was occupied by junior Matt Avena of Middletown, who portrayed Constitutional Party candidate Darrell Castle.

The Castle campaign interrupted the Green Party’s rally as well.

“I thought it was quite unprecedented for other candidates to interrupt our rally today, as we didn’t interrupt any campaign rallies, and as far as I know, no one had before today,” McDonnell said. McDonnell prepared for the debate that afternoon by researching Stein’s policies and making sure her answers exemplified Stein’s core values.

Yaron offered an explanation on why voters should choose Stein.

“She is truly the ultimate third party candidate with modern and progressive viewpoints… Her ideas aren’t radical, but progressive and go along with the values of this generation.”