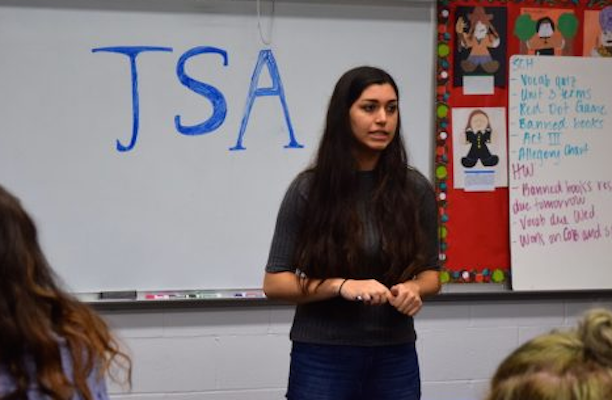 The 2016-17 school year kicked off with the addition of the Junior State of America (JSA) club. Junior Samara Ghali of Colts Neck leads the official club as its president.

JSA Club is the CHS branch of the respectively named national organization that hosts multiple conventions on the state and national level, similar to that of SkillsUSA, Ghali said.

“The members debate individually against others in a certain debate format where there are two main speakers and several subsequent speakers,” Ghali said. “There are at least five debates per convention, and after debating and voting, there’s a dance.”

Although the JSA club has around 35 members and meets on a weekly basis this year, the club faced several conflicts and therefore, took over a year to establish and then become official, which means the club receives stipends from the Board of Education, said Principal James Gleason.

“The first issue was that it wasn’t in the budget to have a paid teacher adviser, so I asked my mom to advise, and for some reason, she said yes,” Ghali said.

Ghali hopes to use the new Board of Education stipend as well as upcoming fundraisers to lower the membership expenses.

“There’s a $5 membership fee and convention costs are normally $135 per person except for the Washington D.C. convention fee which is $240,” Ghali said. “So we’re trying our best to fundraise enough to keep the cash coming.”Audrey Mannion