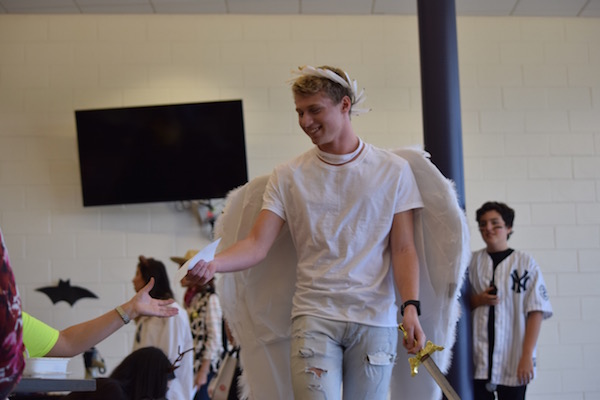 Senior Matt Miller is pictured in the Halloween Costume Contest on day one of spirit week.

Over the years, Halloween has evolved into a night that is different for many different age groups, specifically teens. But the classic Halloween staples of costumes, trick-or-treating and parties remain for some CHS teens.

Costumes are still popular for the CHS Beasts during Halloween, though motives are different. Senior Mark Dispigna of Lincroft said he only gets dressed up for the sake of Spirit Week points.

Other Halloween costumes take months to plan, especially when a possible popular Instagram picture is on the line, said sophomore Mia Gallo of Aberdeen.

“It usually takes me about a month or so to decide on a Halloween costume. I also like to make sure that the costume will make a cute Instagram picture,” Gallo said.

“I think trick-or-treating is for the kids. I don’t think teenagers should be running around at night taking candy that could be for the little guys,” Schobel said.

“I think that anyone should be able to trick-or-treat for as long as they’d like. Even adults should have the choice to participate,” Dispigna said.

Math teacher Justine Lane said that her kids stopped trick-or-treating at the age of 15 although they do still dress up in costumes.

“My 17-year-old, Jimmy, stopped around 14 or 15. But for the last two years, he has run around with a full-on Batman costume with the muscles on Mischief Night and Halloween. Now, the little kids sort of hope that they see Batman,” Lane said.

For teens who are not animate about either, like freshman Ben Hewson of Fair Haven, parties are a popular alternative.

“There are a lot more Halloween parties now then there were when I was younger. I’ve already been invited to a few this year,” Hewson said.

No matter what’s on the agenda for this Halloween, whether it be costumes, trick-or-treating or parties, the holiday provides options for all ages.