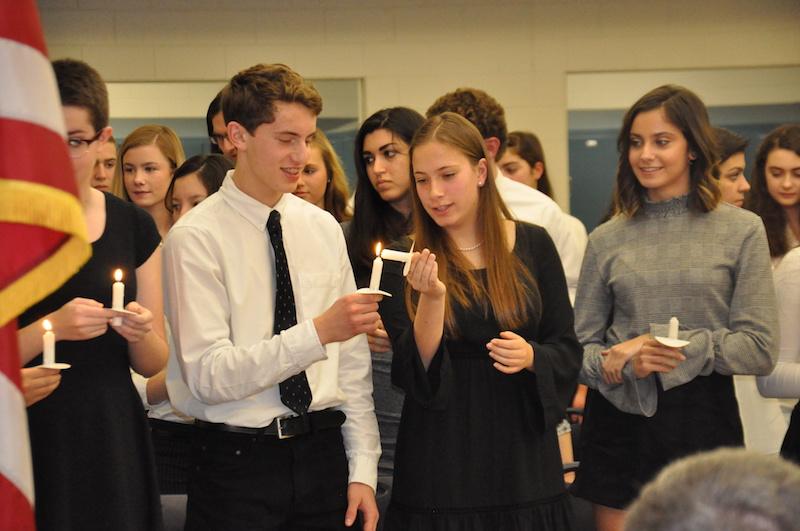 NHS Inductees light their ceremonial candles at the Dec. 7 Induction.

Both Principal James Gleason and MCVSD Superintendent Timothy McCorkell gave speeches during the ceremony highlighting the accomplishments of the new inductees.

The NTHS induction was first and began with explanations of the society by NTHS adviser Debbie Maher and NTHS President and senior Sarah Lynch of Interlaken.

“Each NTHS member is required to maintain a minimum grade point average of 90 percent and excel in a theme-based area,” Lynch said.

The returning NTHS members lit candles for each of the values of NTHS: skill, development, honesty, responsibility, service, scholarship, citizenship and leadership.

The focus of the event then transitioned to NHS. Attendees watched a student-made video featuring the compiled responses of new inductees to the question “What motivates you?” The induction continued with the candle lighting ceremony. NHS President and senior Sarah Lang of Monmouth Beach stressed the significance of this tradition.

“The lighting of the candles represents each pillar of NHS,” Lang said. “These four pillars, character, service, leadership and scholarship, are four qualities every member has exhibited in order to be a member of the club.”

In order for junior and senior applicants to be inducted, they must meet certain criteria which includes a 92.00 GPA or higher and a minimum of 100 hours of community service and 50 hours of leadership.

NHS inductee and junior Kyra Lally of Freehold always knew that she wanted to join NHS.

“When I first came to Communications, I saw [NHS] did a lot of cool things,” Lally said. “I knew I wanted to be a part of it instantly.”

Senior Allie Kuo of Tinton Falls was excited to be inducted as a new member of NTHS.

“Being in NTHS means that the skills I picked up here at CHS like photography or art can be recognized and it’s something that I’m really proud of and to be a part of it is fabulous,” Kuo said.