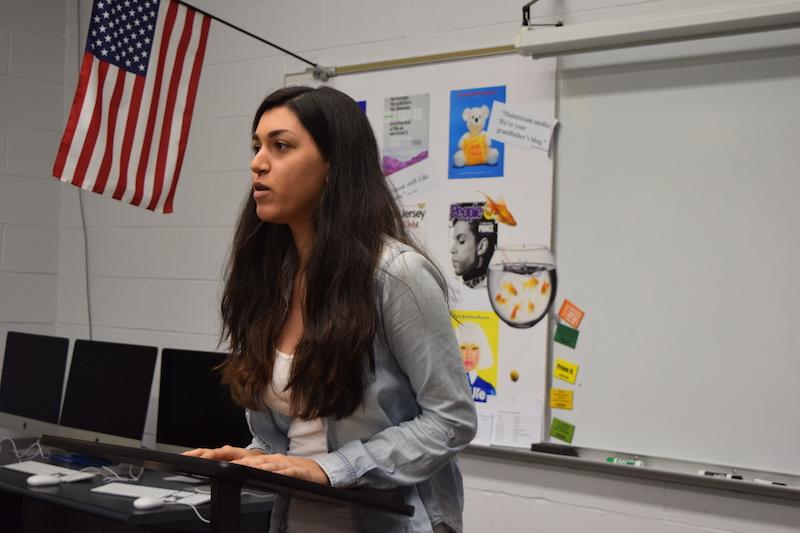 Junior Samara Ghali lead JSA to through their conference.

The newly-established CHS Chapter of the Junior State of America (JSA) took its first club trip to the 2016 Mid-Atlantic Fall State Conference on Nov. 19 and 20. JSA club members arrived at CHS at 8 a.m. on Saturday and traveled to the Woodbridge Renaissance Hotel in Iselin, NJ. The students returned to the school on Sunday at 4:30 p.m, JSA President Samara Ghali of Colts Neck said.

Planning for this event began in early October. Ghali first had the trip approved by Principal James Gleason. Along with a $5 club membership fee, students had to pay $135 to cover the cost of attending the conference and the hotel room, Ghali said. Students with financial issues had access to partial scholarships facilitated by the JSA administration.

Ghali expressed that it was a tremendous effort to prepare for the conference. “Planning and organizing for the trip was a long process of deadlines and paperwork and money deposits,” Ghali said.

Ghali also had to make sure the adult chaperones were set. While not the official adviser, Spanish teacher Karen Britto accompanied the club on the trip because Gleason wanted a CHS teacher supervising in addition to the official adviser of the club, Ghali’s mother, according to Britto.

Various JSA chapters from schools across the Mid-Atlantic region attended the conference, which featured multiple debates on current topics or issues with student speakers and moderators. On Saturday, students listened to a keynote speech from New Jersey Senate President Stephen Sweeney, who spoke about his experiences as a state senator. There were also recreational activities for students on Saturday night, including a dance and a quiz bowl.

Main speakers for each debate were chosen at random from a pool of students who signed up prior to the conference. From the CHS Chapter, junior Jonathan Slovak of Spring Lake Heights, sophomore Maria Maroko of Marlboro, and freshman Vaughn Battista of Tinton Falls were each chosen to be a main speaker. They debated that Hillary Clinton is a true liberal, that Common Core should not be abolished, and that Richard Nixon’s southern strategy was not racist, respectively. Students were also subsequent speakers for debates throughout the weekend, including Battista, who enjoyed both speaking at and watching debates.

“I was a subsequent speaker for many debates, and I was a main speaker for one debate,” said Battista. “The thoughtful discussion in most debates were very interesting. I would consider attending a future convention.”

At the end of each debate, audience members voted on who they believed was the best speaker. While no CHS students were voted as best speaker, Ghali believed the trip was a good experience for the club nonetheless.

“For a first convention I think it was successful and as long as it met everyone’s expectations,” said Ghali. “I think people overall really enjoyed themselves and look forward to the next convention.”