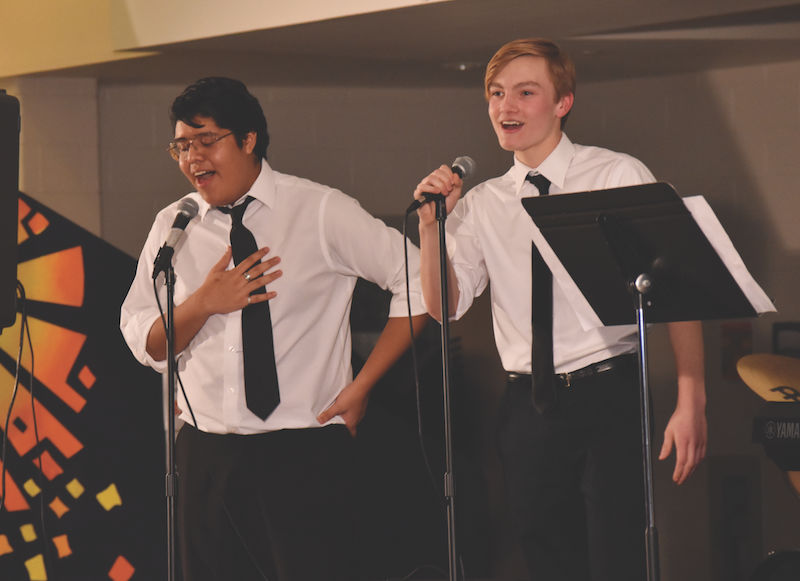 The Class of 2018 hosted the annual Coffeehouse, at which poetry and music of all kinds took center stage. Students of every grade were able to showcase their talents to their friends, family and peers on Dec. 9.

This year’s set list was comprised of 34 acts, including singers, dancers, poets, musicians and one magician.

Junior class President Samara Ghali of Colts Neck said that preparing for Coffeehouse began over a month in advance.

“The junior class council and a good portion of the class worked hard to meet deadlines and make difficult decisions,” Ghali said.

The Class of 2018 adviser and Spanish teacher Karen Britto worked closely with the juniors to prepare for the event.

Coffeehouse is crucial to the class’ budget this year as they prepare to fund big events in the upcoming years. Last year, The Inkblot reported the Class of 2017 raised $1,400 through Coffeehouse. Ghali said this year’s Coffeehouse raised $2,400.

“Most of our profits [will go] toward prom and our senior trip,” Ghali said.

In the hours before the event, students decorated the cafeteria in string lights, Polaroid pictures and paper hearts.

Juniors Jonathan Slovak of Spring Lake Heights and Marcos Guevara of Cliffwood emceed the event and encouraged the audience to share their thoughts and opinions on social media with the hashtag #CHSCoffeehouse and the tag @CoffeeHouseCHS.

DeRosa is a returning performer and chose to audition this year because she appreciates the uniqueness of the event.

“It’s a really supportive environment filled with kind people sharing their talents with others,” she said. When asked if she plans on returning next year, DeRosa said, “Of course! Chemistry 1?”

Ghali expressed her satisfaction with the execution of Coffeehouse.

“I think Coffeehouse went smoothly. Everything was prepared beautifully and on time, and the tech was handled very efficiently,” Ghali said. “I’m genuinely really proud and grateful for our classmates who helped make the night such a success.”

Britto agreed. “I thought the event was amazing and I am very proud of not only the class council but all of the juniors who helped out.”

Junior Kyra Lally of Freehold sang this year at Coffeehouse, and considers it her favorite CHS event.

“Coffeehouse was a lot of fun. It was definitely very well put together by the juniors and Ms. Britto, just like it is every year,” Lally said. “I will definitely consider auditioning again in the future.”