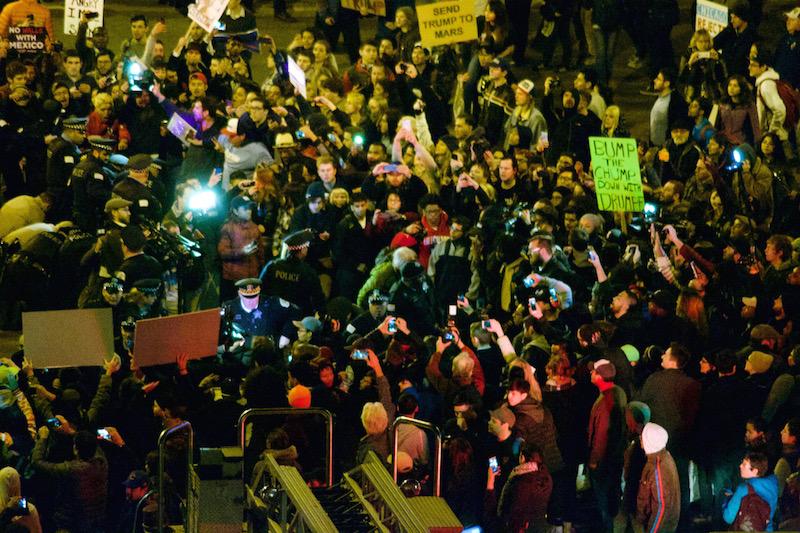 People gathered to protest against Trump throughout the night in Chicago.

Fifth Avenue – the shopping center of Manhattan, with block after block sporting stores such as Gucci, Saks Fifth Avenue and Louis Vuitton – has been more crowded than usual. But those crowding the streets since Nov. 9 are not there to pick up a new handbag, but to protest President-elect Donald Trump outside his own home and office building, Trump Tower.

The protests happened not only in Manhattan, but across the country. Protesters “flooded the streets,” of major cities including Boston, Los Angeles and Chicago, according to CNN. But several CHS students, including junior Erica Lalor of Aberdeen, do not think they are worthwhile.

“[Protesters are] not going to change the president just because people are rioting about it,” Lalor said.

“We shouldn’t be hateful, and we shouldn’t follow what Trump is doing,” Madeira said. “But they are following it up by doing very hateful acts so it’s kind of contradictory.”

Unlike Madeira and Lalor, sophomore Liam Marshall of Sea Girt believes that protesters, depending on the situation, are able to get an effective message across.

“I think they really can get the word out about a cause,” Marshall said.

Junior Zoe McDonnell of Middletown, attended a protest against President-elect Trump at Union Square Park in New York City on Nov. 12, and she had a really positive experience while attending.

“Most people see these protests as kind of negative things and all about bashing Trump,” McDonnell said. “It was mainly about where we can go from here.”

McDonnell said that many people were upset. There was a microphone being passed around where people shared ideas on what needs to be done now.

She described the experience as “uplifting” and would definitely attend another protest.

“It is important to have your voice heard and not sit down and do nothing,” McDonnell said.