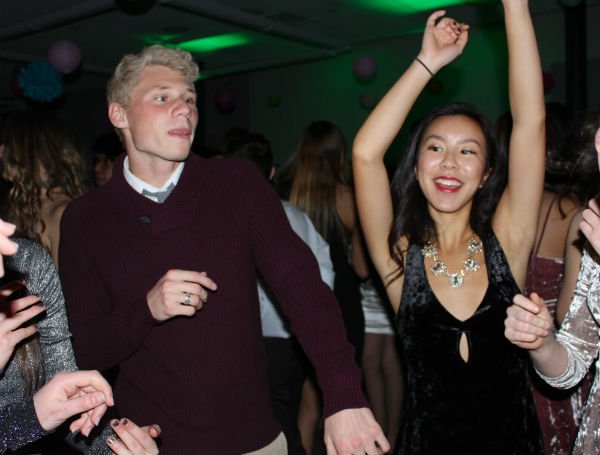 Seniors Matt Miller of Wall and Allie Kuo of Tinton Falls dance to "Dancing Queen" by ABBA, for the first time in their four years of winterballs.

The Class of 2019 transformed the CHS cafeteria with paper lanterns and handmade snowflakes to fit their chosen theme of Northern Lights for the annual Winter Ball dance, held on Jan. 6.

The council divided themselves into five separate committees to plan the event: advertisement, food, music, decorations and setup/cleanup, said sophomore class secretary Rebecca Rippon of Ocean. A different council member headed each committee.Rippon headed the decorations committee and found preparing for the dance to be stressful.

“Decorations were an integral part in making Winter Ball fit under the theme of Northern Lights,” Rippon said. “A lot of work had to be done in advance, but a great deal of it had to be left until the last minute, which was extremely nerve-wracking. However, in the end, it was very rewarding, and I feel very proud of what our class accomplished under such pressure.”

Preparations for Winter Ball began in November, and many students helped out to ensure the event was as successful as it could be.

“It took roughly 27 hours to spray paint everything, and then I took everything home to detail in the words,” Gao said. “I printed the words out from Adobe Illustrator and I transferred them onto the boards. I went in with acrylic and I colored them all in, which took a total of 16 hours.”

Marshall said the night went off almost without a hitch.

“The geofilter we had planned wasn’t set to Snapchat in time, and the food was coming out as people were already at the dance,” Marshall said. “Other than that, it went perfectly.”

“The energy was fantastic,” Hewson said. “The food was awesome and the decorations were really nice. I’m definitely going again next year and I guarantee the majority of the freshman class agrees.”

The night’s success would not have been possible without everyone involved in the process.

“We could not have pulled off such a fantastic night without the help of our classmates and friends, our advisors, teacher volunteers, the custodial staff, and other faculty,” Rippon said. “We want to say a huge thank you to everyone who contributed for their effort and dedication.”