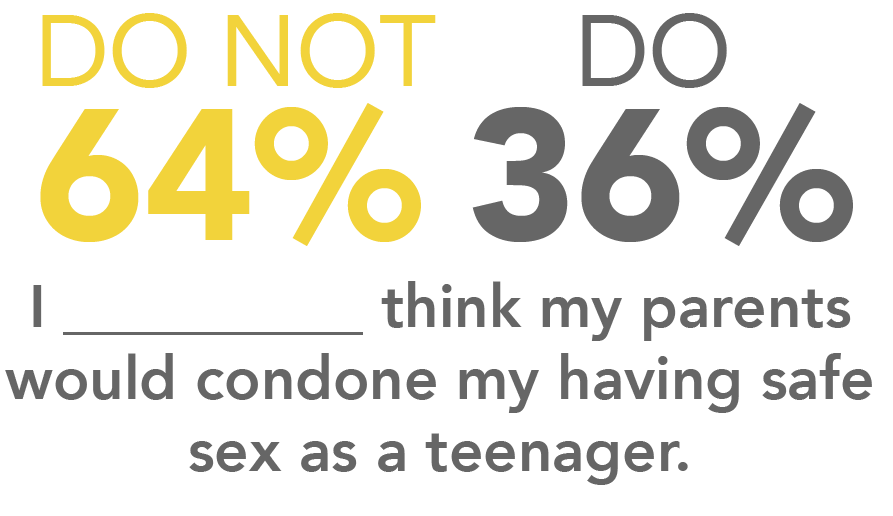 Approximately 65 percent of CHS students do not talk to their parents about sex, according to a survey of 228 students from Jan. 19 to Jan. 20, and 68 percent do not feel comfortable bringing up the subject. Conversations with parents about sex can be anything from awkward to helpful, with rules set depending on personal to religious beliefs.

Senior Shannon Bradley of Keyport said her discussions with her parents on the subject have been honest and open.

“Once I hit puberty, my parents were very open with me on what sex was,” Bradley said. “I feel pretty comfortable talking to my parents about sex mostly because there’s nothing to be embarrassed about.”

“I do not feel comfortable about talking openly about it with my parents,” Batista said.  “I don’t plan on engaging in sexual activities so I’ve never felt the need to.”

Whether the discussion exists, or if it is awkward or not, research shows parents can be a key influence in a teenager’s outlook on sex. A program done by Advocates For Youth, a charity promoting the rights of sexual education for all youth, found that teens that communicate with trusted adults about sex use contraception more consistently and are less likely to be found pregnant or with a sexually transmitted disease.

Sophomore Bridget Woodrow of Belmar has talked to her parents about safe sex and when to have it.

“My mom told me to tell her if I want or need birth control,” Woodrow said. “She condones safe sex.”

An anonymous senior girl said sex is never discussed at her household.

“I’ve never directly discussed having safe sex at home with my parents. Honestly, it seems easier to avoid the awkwardness than actually address it with them,” she said.

Religion is also a factor in deciding when it is acceptable to engage in sexual activity. Christianity believes in chastity until marriage.

Senior Kayla Smith of Lake Como is the president of Christian Club.

“God intended sex to be between one man and one woman in the confines of a marriage because it represents the spiritual marriage between Jesus and his people,” Smith said. “I believe what the Bible says and strive to live a life of purity to honor him.”

Sophomore Caitlin McLaughlin of Lincroft is a Roman Catholic.

“My religion believes that sex is only for within marriage,” McLaughlin said. “The decisions I make are based on my personal values which are formed in part by my religion.”

Judaism also prefers sex to be within marriage.

An anonymous sophomore boy practices Reform Judaism. This branch of Judaism leans toward the liberal side in its rules, including sex.

“It’s a natural process, and it’s generally accepted in moderation,” he said. “My personal view is that each person is going to be ready for sexual activity at their own time.”

“My parents were conditioned to avoid discussion about sex. It was considered a very taboo topic. They never received sexual education from their parents, so they never really talked to me about it either,” Ghali said. “Their thinking seems backwards to me and their attempt to censor my life kind of had the opposite effect. To me it feels wrong that they shame something so fundamentally human.”

Despite what one’s religion may say about sex, some experts say having an educated discussion about it is beneficial. An expert panel from WebMD’s Task Force on Community Preventive Services revealed that sex education reduces the number of teens who have sex, their frequency and number of partners, along with transmitted infections. It increases the use of condoms and other methods of birth control.

While religious and parental restrictions may make conversations about sex tense or non-existent, studies, such as those from Planned Parenthood and WebMD, argue that it is better to face the topic than to avoid it.