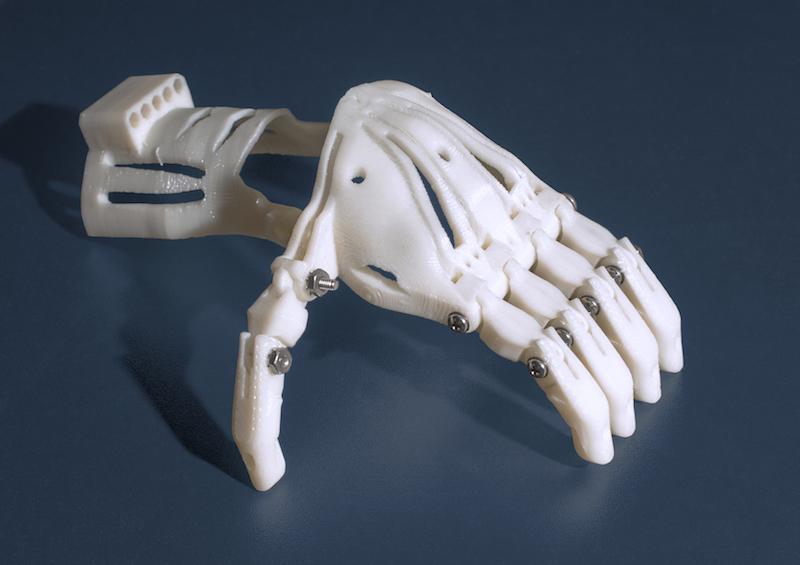 The U.S. Food and Drug Administration

Four CHS students worked to create a prosthetic like the one pictured above.

For 14.5 hours, the CHS makerbot works tirelessly to create an entirely functional prosthetic hand for a child in need. Although on the first try the hand stuck to the 3D printer, another hand will be printed in upcoming weeks, said senior Josh Tobia of Howell.

Four senior NAHS members were selected as participants in the Prosthetic Kids Hand Challenge. Shannon Bradley of Keyport, Sydney Foo Siam of Millstone, Kathryn Willis of Tinton Falls and Tobia round up the team under supervision from technology teacher and project adviser Laura Gesin. Gesin learned about the project from ABC 7 Morning News.

“It was created in Kansas by a class of sixth grade students who had a makerbot and realized it was sitting idle, just like ours is at points in the year,” Gesin said. “They decided to see if they could create a prosthetic limb that would work for children because since children are still growing, you don’t want to spend a ton of money on a prosthetic limb they are just going to outgrow.”

Principal James Gleason said the makerbot was purchased a few years ago. It is used most frequently in animation classes since it was delivered in March 2015. Tobia said the equipment is ideal for the Prosthetic Kids Hand Challenge.

“The makerbot is a 3D printer that we use. It’s basically a free program for modeling. They already have the hand modeled that we are going to use. We just have to print it out and put it all together,” Tobia said.

Tobia and the other participants were selected based on their design and makerbot experience.

“All of us are in NAHS and a couple of us have done some art related classes that involved the makerbot,” Bradley said

As a part of the team, their responsibilities include printing and assembling the hand as well as leading of other groups to teach them how to do it.

Guidance counselor Carol Caruso helped to fund the project as she donated the kit used to create the hand while Gesin purchased the plastic for the hand.

“The plastic for a makerbot is really cheap,” Gesin said.

Students had trouble at first and needed to restart the hand’s creation. The hand stuck to the makerbot on the first attempt.

“There is blue painter’s tape that goes on the bottom of the makerbot as it prints that keeps it from sticking to the plastic of the actual machine,” Bradley said. “But the way we’re printing it, it doesn’t have a bottom basically, so we needed to cover it in hairspray so that way it doesn’t stick to the blue tape of the makerbot.”

Gleason said he is happy that the makerbot is being put to use, especially for a good cause.

“It’s no good for products to be sitting around, not being used. The makerbot was purchased primarily for animation, for some of the students to model their characters,” Gleason said. “But since there’s no animation this semester, I think the makerbot is kind of sitting idle right now.”

The group is not certain as to who will receive the hand.

“We are using purple. That’s the color we’ve decided on. It’s the only thing we really know about who it’s going to,” Bradley said. “So I hope they like purple.”