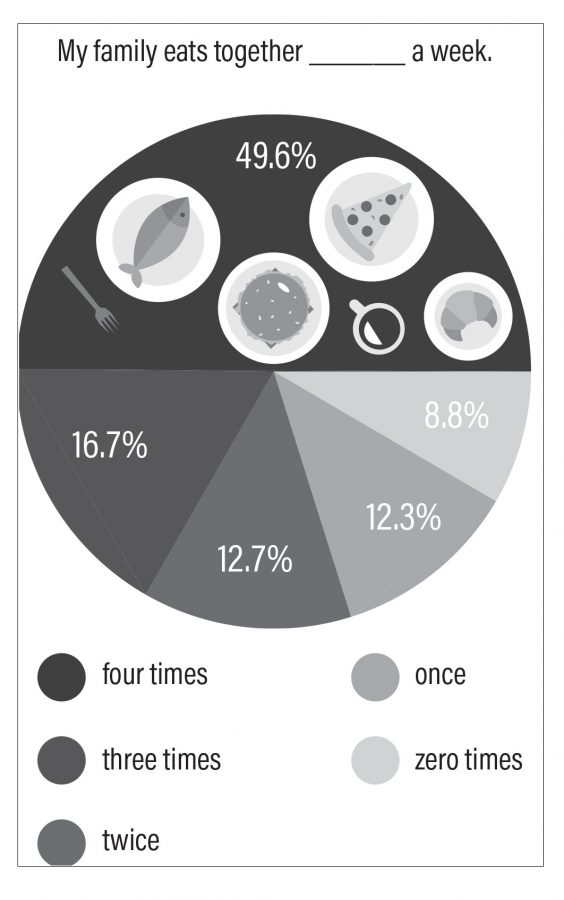 Some CHS families find it difficult to sit down together because of everyone’s busy schedules.

Junior Allison Paglia of Monmouth Beach did not eat with her family often when she was young.

“My family never ate together because my parents would get home really late and when we were growing up we all played sports so we were all in different places at different times so we never ate together,” Paglia said. “But now we eat together a lot more, but I still wouldn’t say it’s a lot.”

Paglia thinks it is nice to eat as a family, but unrealistic given her family’s schedule.

Recent studies report that children who eat with their siblings and parents have “lower rates of substance abuse, teen pregnancy and depression, as well as higher grade-point averages and self-esteem,” according to thefamilydinnerproject.org. “Studies also indicate that dinner conversation is a more potent vocabulary-booster than reading… regular family meals also lower the rates of obesity and eating disorders in children and adolescents.”

A Cornell University study stated that many studies do not consider the types of people that eat meals together.

“Less frequent family meals are generally associated with lower socioeconomic status, maternal employment, single parenthood, and poor quality family relationships,” according to the Cornell University study. “Thus it is difficult to separate the effects that family meals have on positive child outcomes from those of these other factors.”

Junior Meghan Judge of Spring Lake regularly eats with her family — with the exception of swim season.

“I think it’s a really good thing just because you don’t get to see your family often when you’re running around doing all these things so it’s nice to sit down and actually talk with your family other than just kind of saying ‘hi,’ ‘good morning,’ ‘good night’ and all of that,” Judge said.