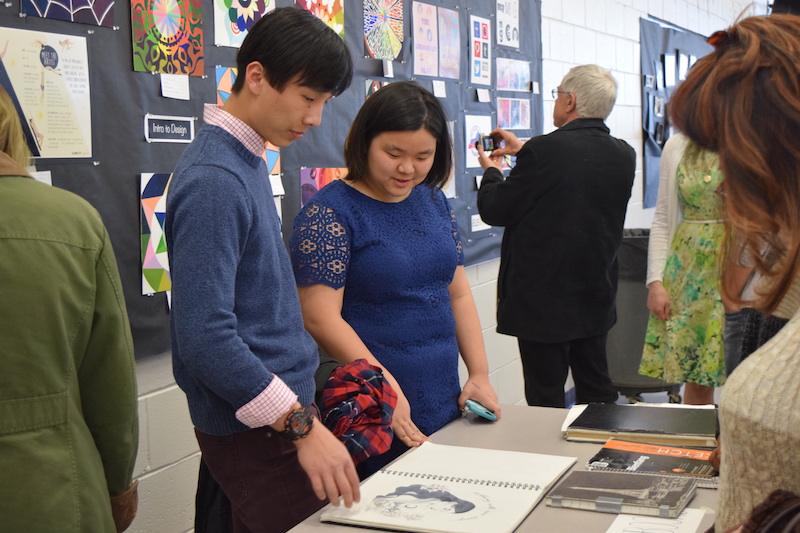 The CHS cafeteria transformed into an art gallery with student and staff art that lined the walls and illuminated the room. Attendees admired the creations, at the annual CHS art show and National Art Honor Society (NAHS) induction held on March 23. Amongst the artwork, stood 40 new NAHS members.

To be inducted into NAHS, a student must have a passion for art and complete five hours of art-related service over the course of the year, said NAHS president and senior Sydney Foo Siam of Millstone.

Students and staff submitted original artwork to design teacher and NAHS adviser Shelley Ortner to have it displayed at the art show.

“It’s considered a juried show so we ask to people to submit whatever they want to submit but then we go through it for quality and to make sure a range of different styles are presented in the art show,” Ortner said.

Sophomore Sabrina Gao of Freehold displayed her art to a crowd for the first time at the CHS art show last year and noted the welcoming atmosphere to all artists of both this year’s show and last.

“In the art show everybody is very willing to share their artwork and it has inspired me to  share with other people,” Gao said.

Sophomore Merina Spaltro of Allentown also shared her work at the CHS art show. She said the art was all posted on folded cafeteria tables.

The art show was not as open in previous years. Ortner said initially the show’s submissions were only open to NAHS members, who are only juniors and seniors. But this system excluded half of the student body, and for the past two years, students of all grades have showcased their work.

Siam credited the success of the show to a team effort.

“This school has so many talented students and it is great to see their works showcased,” Siam said.