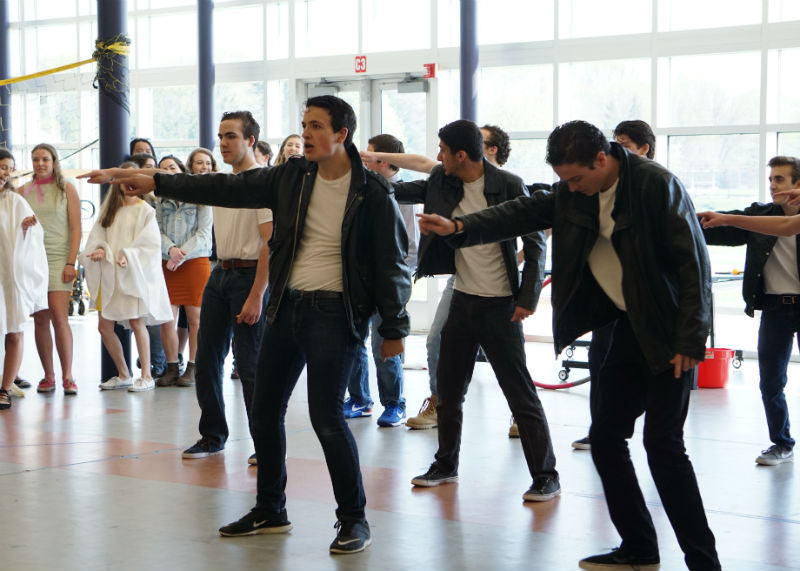 Seniors won Lip Sync with their rendition of the musical "Grease."

Spring Spirit Week came to an end on Friday, April 28. On Thursday, April 27, the theme was Generations Day. The freshmen dressed up as babies, the sophomores were angsty teens, the juniors were professional adults and the seniors were senior citizens.

The lunchtime event was Balloon Pop. Two girls and two boys from each grade entered the competition. The freshman took first place followed by the seniors, sophomores and juniors respectively. Freshman Evan Kuo of Tinton Falls participated in the competition and helped bring his grade the win. Kuo felt that balloon pop was very intense.

“The final rounds were nerve-wracking, but it was gratifying to win an event for my class,” Kuo said.

The clothing drive also took place on Thursday. Each class collected items ranging from clothing and shoes to stuffed animals and even bikes. The SGA provided garbage bags for each grade so  the counting process was fair. The sophomores ended up winning with 219 bags.  The seniors followed with 141 bags, then the juniors with 131 bags and finally the freshmen in last with 88 bags. The total number of bags collected came out to 579. SGA council member and junior Jackie Geller of Manalapan sees that the clothing drive has a greater impact than just Spirit Week points.

“I always like to think about how the things in those bags are going to people who really need it. I think it’s awesome that our school alone donated over five hundred bags,” Geller said.

At the end of the day on Thursday, the seniors held the  first place position with 135 points, followed by the juniors with 130 points, the sophomores with 125 points and the freshman with 110 points.

The theme on Friday was Country vs. Country Club. The lunchtime event was Lip Sync. Teachers judged the competition based on categories such as choreography, participation and the actual lip syncing. The seniors took first place with a “Grease” themed performance. The freshmen came in second, the sophomores in third and the juniors in last place. Senior Annie Ruoff of Monmouth Beach was thrilled with how the senior lip sync went considering it was their first win in four years.

“It was our last lip sync so everyone was so involved and excited to help that it made things ten times easier on me. I wasn’t begging people to be in it. Everybody who participated really wanted to do it to make sure we would win,” Ruoff said.

Mr. CHS took place Friday evening. Five freshmen, five sophomores, five juniors and two seniors competed against each other to win the title of Mr. CHS. The event was hosted by SGA president and vice president, seniors Mark DiSpigna of Lincroft and Julia Pardee of Freehold. The contestants answered questions and competed in a talent portion. Talents ranged from singing and dancing to speed painting and magic tricks. At the end of the night senior Kevin Meberg of Wall was crowned Mr. CHS. In the end, the seniors came out on top to win Spring Spirit Week. The sophomores and the freshmen tied for second place and the juniors followed coming in third place. DiSpigna said he was thrilled with how Spirit Week turned out.

“I’m extremely proud of CHS as a whole for making this past week one that I will remember forever,” DiSpigna said.