Class of 2021 elects their first council 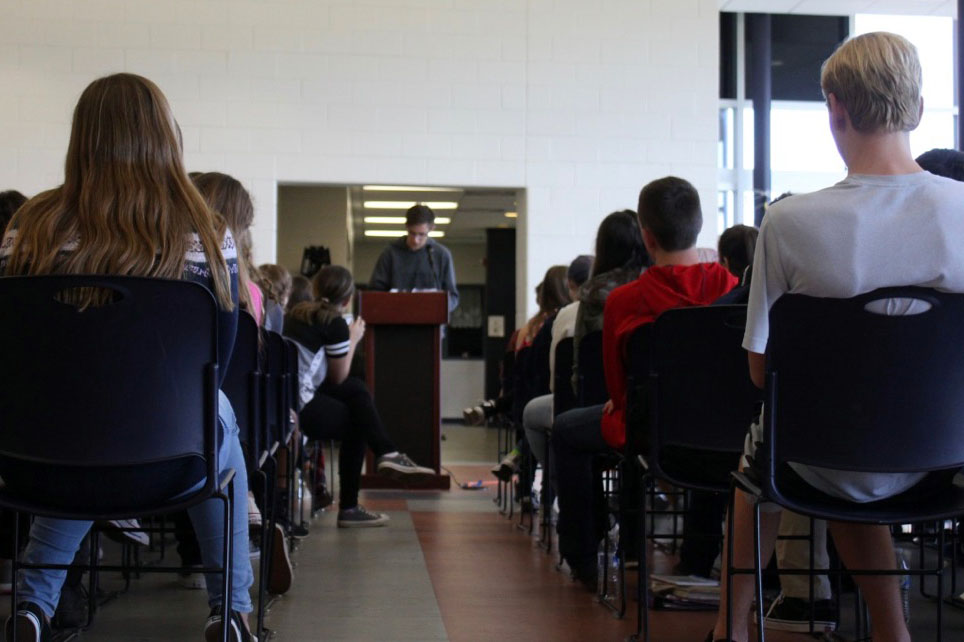 Freshman Steve Ostrom of Monmouth Beach delivers a speech during the Class of 2021 elections.

The freshman Class of 2021 held their student council election on Oct. 3 in the cafeteria. Five students were elected from a pool of ten candidates who made it through primaries from a larger group of 18.

Fitness teacher Ginny Clevenger is the adviser of the freshman class this year. This is not the first time she has had the opportunity to supervise a grade.

The students elected on council were Brigid McCarthy of Manasquan as president, Olivia McCarthy of Howell as vice president, and Riley Forrester of Spring Lake Heights, Zoe Connor-Bennett of Ocean and Steve Ostrom of Monmouth Beach as council members. Brigid McCarthy, who will be class president for the year, viewed the campaign process as extremely stressful.

“For me, running for student council was stressful. There were so many people running, and all of them were perfectly capable of the job,” McCarthy said. “There were candidates with better posters, or more friends, so it was always hard to tell where you stood.”

Both Clevenger and McCarthy are excited for the coming school year. Among their list of goals for the grade, their main priority is to raise as much money as possible.

“I believe freshman year sets the groundwork for the next three, so this year is all about fundraising,” Clevenger said.

The freshman class council will hold their first meeting sometime next week to meet with the grade and plan for the upcoming year.