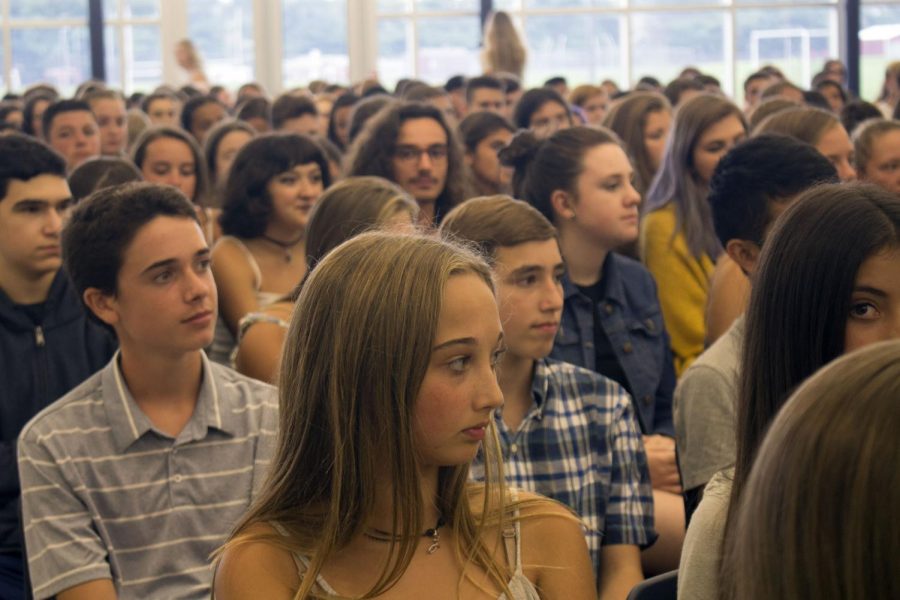 Fourth period ended early to allow for the student body to assemble in the cafeteria at 1:40 p.m.

As summer came to a close, CHS opened its doors up to students on Wednesday, Sept. 6.

At 10 a.m., the National Honor Society (NHS) held an assembly where freshmen and Design Academy students were given help with their lockers, as well as time to ask questions and receive answers from senior NHS members.

Freshman Steve Ostrom of Monmouth Beach said that the adjustment to CHS was easier than expected.

“The amount of new people was super overwhelming at first,” Ostrom said, “but everyone was helpful and made my first day so great.”

For junior Summer Ward of Oceanport, settling back into the school year was much easier as an upperclassmen than in her previous years.

“I was much more confident to come back this year because I’ve done it for the past two years and definitely feel more comfortable in the school,” Ward said.

Senior Felicia Aschettino of West Long Branch said the first day got her excited for her final year at CHS.

“I’m so excited to get involved with new classes that I haven’t had the opportunity to take like Creative Writing and Forensics, and I’m looking forward to meeting new people from different grades,” Aschettino said.

The day ended with an assembly held by principal James Gleason, welcoming the students, staff and faculty back for another year.

Senior and SGA President and Jacqueline Geller of Manalapan discussed the upcoming events for this year, including Spirit Week, Winter Ball and Color Wars, as well as some new surprises planned by the SGA council over the summer.

As per CHS tradition, an Italian ice truck provided by the SGA arrived at the conclusion of the assembly. Members of the SGA distributed the frozen treats, as did the operator of the truck.

Geller said that she plans to continue traditions such as the Italian ice truck while also introducing new events.

“I plan to focus a lot on the Spirit Weeks and Color Wars, just like how the SGA did in the past,” Geller said. “We brainstormed a couple of surprises for the school year that we can’t wait to share in hopes to get the school more hyped up for our events.”