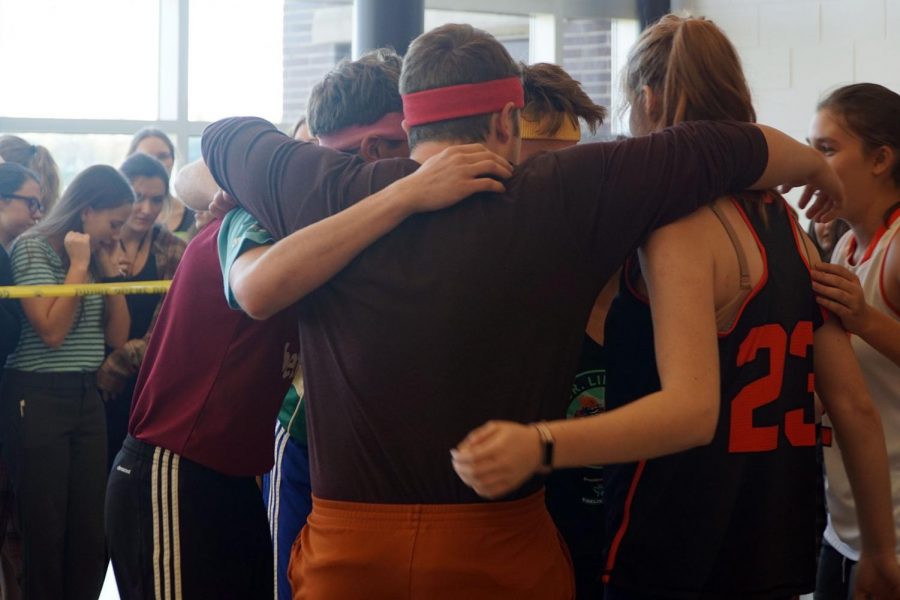 The senior Dodgeball team huddles before competing against the sophomores. The seniors placed third in the event.

Though students walked into school today sporting robes, slippers and flannel pants for the final day of Spirit Week, Pajama Day, it was not a sleepy day by any means.

The seniors took the win for Spirit Week with 316 points, followed by the sophomores with 295. In third with 243 points were the juniors and the freshmen took fourth place with 207 points.

The juniors won the fifth and final Scavenger Hunt, followed by the sophomores in second, the seniors in third and freshmen in fourth.

“I felt nervous but at the end of the day, it’s an event that requires participation from as many people as possible,” Treshock said.

After the Scavenger Hunt, students gathered to watch the Dodgeball competition held in the cafeteria. Each grade consisted of a team of three boys and three girls. The sophomores took the win, followed by the freshmen, seniors and juniors, respectively.

Freshman Ethan Hecht of Wall was a part of the freshman Dodgeball team.

“It was really exciting and the energy of the school was intense but fun,” Hecht said.

After the Dodgeball competition, the sophomores and seniors were tied, with the juniors and freshmen trailing closely behind.

Penny Wars ultimately determined the winner of Spirit Week. The seniors won the war, the sophomores came in second. In third place were the freshmen and the juniors took fourth.

Senior chants were heard throughout the school when their win was announced at the end of the day.