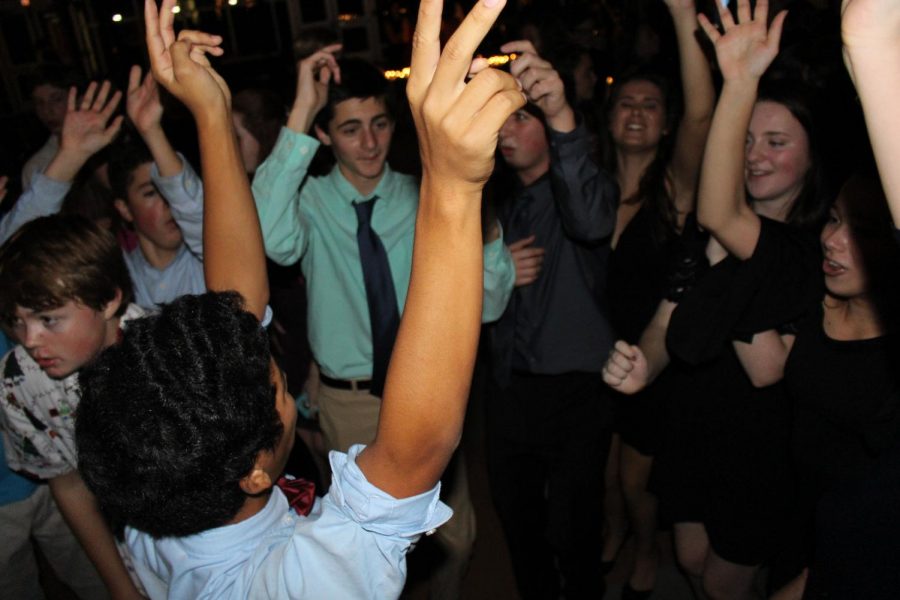 Students danced to hits by artists such as Nicki Minaj and Pitbull at the first ever homecoming dance.

Despite not having a football team, students at Communications High School attended the school’s first homecoming dance on Friday Nov. 3 in the cafeteria. The dance, which SkillsUSA President and senior Emma Wilenta of Wall said was conceptualized over the summer, featured many similarities to other schools’ homecoming dances, yet still had some unique aspects.

“It’s different because there’s no homecoming football game to go with it like other high schools have,” Wilenta said. “Our court has a king and queen chaperone and a student in each grade as a prince or princess.”

In the weeks prior to the event, students nominated members of their grade for the homecoming court. They had the opportunity to vote for the court at the dance, and the Skills council announced the results towards the end of the night.

Eight students, two from each grade, were selected for the court, with math teachers Scott Stengele and Justine Lane crowned the King and Queen.

Freshman Steve Ostrom of Monmouth Beach was a member of the court representing his class, with fellow freshman Zoe Connor-Bennett of Ocean.

“It was such an honor to be one of the two that my classmates chose to be on the court,” Ostrom said, “It was a great night and I’m so glad I was able to go.”

Other members of the court included sophomores Matt Emery of Ocean and Brian Schade of Tinton Falls, juniors Kathryn Jemas of West Long Branch and Kyle Wheeler of Wall and seniors Jackie Geller of Manalapan and Kyle Galvin of Middletown.

Skills USA Vice President and junior Connor Martin of Spring Lake Heights handled the finances and marketing for the night, including ticket design and sales.

“I led the tickets committee, designing the tickets, printing advertising material and organizing the sale of tickets. In total, we sold over 250 tickets and made more than $2000,” Martin said.

Wilenta said the money made from the dance will help with the costs for the members of the club to attend and compete in competitions.

“All of our money goes directly to members. We would never want someone to not join Skills USA for financial reasons, so all of our fundraisers, especially the dances, are super important because they have the potential to make a lot of money for Skills,” Wilenta said.

Students like Schade expressed their enjoyment of the event.

“It was a really fun night,” Schade said, “being chosen for the court was surreal to say the least, and I had a great time.