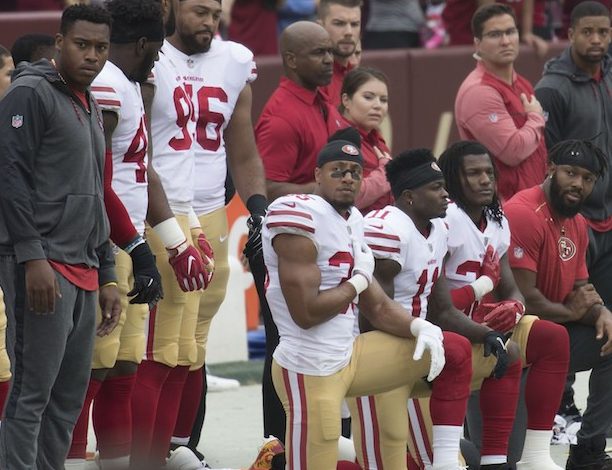 San Francisco 49ers kneel during the national anthem in 2016.

It all started with a kneel. Colin Kaepernick, the quarterback of the San Francisco 49ers at the time, took a knee during the national anthem at a home game against the Houston Texans on Aug. 14, 2016 to start the conversation on police brutality that had been previously avoided.

In a press conference, Kaepernick said, “I am not going to stand up to show pride in a flag for a country that oppresses black people, and people of color.”

Kaepernick was not signed onto the team the following season because teams did not want to take sides on a political issue, as stated in an article by Sports Illustrated. But, nobody could bench the protests. To spread Kaepernick’s message, athletes of all sports, particularly football, have taken part in this demonstration by kneeling while “The Star-Spangled Banner” played.

These professional athletes use their fame and positions of influence to speak for those who were and still are affected by police brutality, such as the unarmed black Americans that are 3.49 times more likely to be shot by police than unarmed white Americans, according to a study by Professor Davis of the University of California. Athletes stand up for what they believe in when others are not allowed the same opportunity.

On Sept. 22, 2017, while the political statement settled for a year, President Trump called attention to his dislike of the protests at a rally in Alabama. After receiving backlash, he followed up his comments with a tweet, saying that anyone “disrespecting our Flag & Country” by kneeling should be fired or suspended. He suggested that the NFL put forth rules and regulations to prevent future incidents from occurring.

“We are proud of our players… the vast majority of whom use their NFL platform to make a positive difference in our society,” the owners of the New York Giants, John Mara and Steve Tisch, said in a statement in response to President Trump’s comments the day before.

However, in the first amendment of the United States Constitution, it states that, “Congress shall make no law… abridging the freedom of speech… or the right of the people peaceably to assemble, and to petition the Government for a redress of grievances.”

This writing shaped the foundation of our country. No organization acting under the color of state law is permitted to make such rules that violate Constitutional rights.