Bruce: a Jersey legend moves from Stone Pony to Broadway 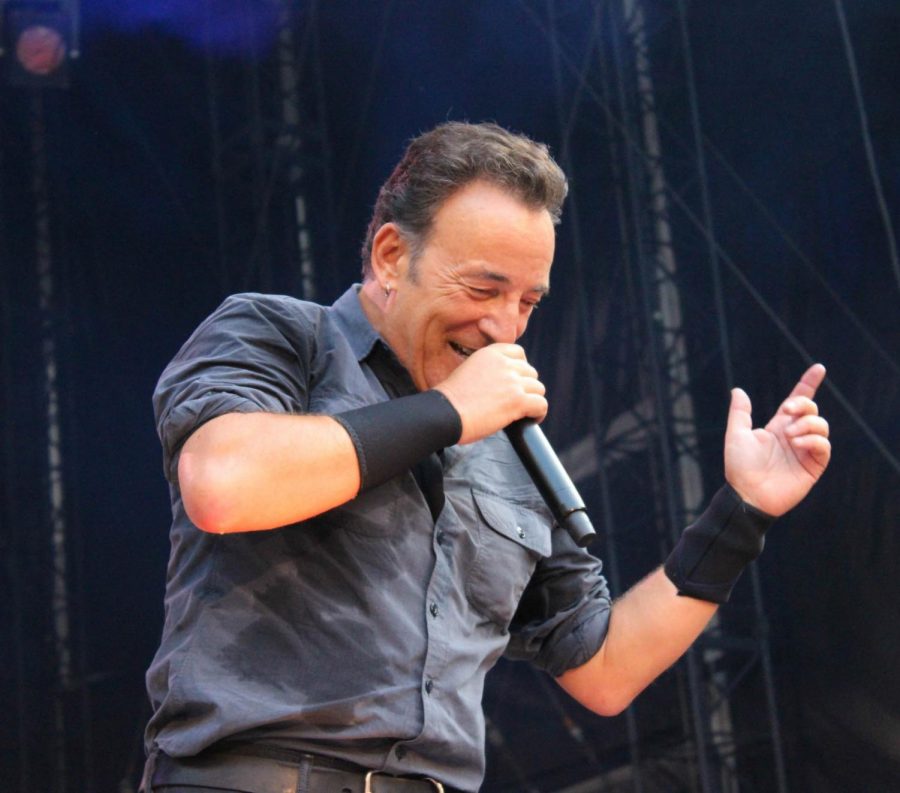 Bruce Springsteen makes his debut on Broadway this year.

From playing sold-out arenas to winning Grammys, American singer-songwriter Bruce Springsteen has influenced rock music since the ‘70s. Today, he still remains a prominent figure in the music industry.

Before Springsteen reached such popularity, he was just another guy from New Jersey. Growing up, Springsteen developed a rocky relationship with his father. In response to their constant bickering, the rock musician bought his very first guitar in Monmouth County’s own Freehold Borough.

“When I was growing up, there were two things that were unpopular in my house,” Springsteen later recalled in his biography “Bruce Springsteen: Two Hearts, the Story.” “One was me, and the other was my guitar.”

Yet he soon had his father to thank for inspiration in his career.

“I’ve gotta thank him,” said Springsteen in his acceptance speech at his induction to the Rock and Roll Hall of Fame in 1999, “because what would I conceivably have written about without him?”

Using personal experiences to fuel his music, Springsteen frequented Asbury Park on the New Jersey Shore during the 1960s. By 1972, he released his first studio album, “Greetings from Asbury Park, N.J.” But it wasn’t until his third album, “Born to Run,” that he skyrocketed into fame, said Wall Street Journal.

“It didn’t matter that Springsteen was singing about Jersey wastoids chasing a ‘runaway American dream.’ The songs made sense to people who’d never tasted salt-water taffy or even driven a Chevrolet,” Billboard later said in an article.

His support did not waver as he continued with the release of his fourth album, “Darkness on the Edge of Town.” Springsteen “became famous for his integrity and pride as a performer, as stories of his exhausting performances and perfectionism in the recording studio became legend,” according to Biography.com.

Later albums “The River” and “Nebraska” explored stories of working class Americans for people to enjoy. “Born in the U.S.A.” only took him even farther in his career, delving in more mainstream music.

“Bruce Springsteen gave people faith in rock & roll and in themselves again. In 1975, when his song “Born to Run” was released, American rock & roll fans were still reeling from the deaths of Jimi Hendrix, Janis Joplin and Jim Morrison, and coping with the national tragedy of the Vietnam War…Bruce showed his audience and whoever would listen what an uncompromising will can achieve,” said Rolling Stone.

Today, his music still helps people in the face of darkness with his inspiring lyrics. “Springsteen is not trying to write the next hit, but he has a following worldwide who shows up for everything he does,” said USA Today. Springsteen may not be your average performer, but that’s exactly what keeps his career alive even today.

When people thought he would retire, his response to “60 Minutes Australia” was, “I don’t know how old I am when I’m on stage… I’ve got a long road in front of me.” Fans, young and old, help to make this possible.

Teacher Steve Godkin likes both his music and his personality. “Even for all of his success, he still remembers where he came from,” said Godkin. “He seems like a regular, nice person.”

Springsteen also draws in a younger crowd. Senior Felicia Aschettino of West Long Branch has enjoyed listening to Springsteen’s music since she was young.

“I love his sound. You can tell he means every word he sings,” Aschettino said.

At 68 years-old, the singer-songwriter’s next endeavor are shows at the Walter Kerr Theatre on Broadway. “This is a locked-in piece of music and script that I’m going to be performing pretty much the same on a nightly basis,” Springsteen explained this new path in his career to New York Times. “It’s a solidified piece of work. And I think the intimacy of the venue is going to really affect it, to make it quite a bit different from the acoustic tours.”

“Springsteen on Broadway” will be running from October 3rd to February 3rd, with tickets costing up to $850. With such popularity, a digital lottery to get tickets has already opened.

But even with his fame, the singer has not forgotten about his roots. Recently, Springsteen has returned to venues like the Stone Pony that helped him to get his start. On May 27, he was seen at Count Basie Theatre in Red Bank while on May 29 he was spotted at Freehold’s Memorial Day parade, said NJ.com. After just publishing his autobiography “Born to Run” and completing a world tour, Springsteen chooses downtime at home. Though his career has been long, he will always be the boy with the guitar.