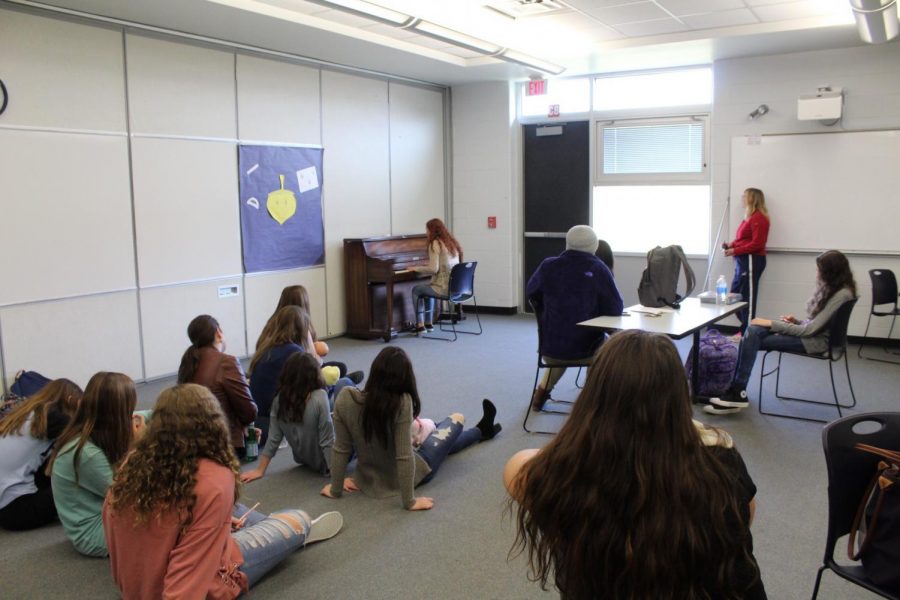 Students who attend Musical Mindful Mondays sit on the floor to listen to their classmates.

There is a new way for CHS students to display their talent that will continue for the month of December. Musical Mindful Mondays, started by fitness teacher Ginny Clevenger, began on December 4.

The event is every Monday of December during lunch. Clevenger described this as, “a time and a place for students to mindfully stop by, relax and listen to their friends perform music.”

Clevenger said she was inspired to start the event because of the students who wanted to perform at Coffeehouse but could not attend the event.

Among the four acts on the first Musical Mindful Monday was sophomore Nicole Sestito of Wall, who played the piano and sang Ed Sheeran’s ‘Perfect’ and Leonard Cohen’s ‘Hallelujah.’ Sestito said that her experience performing in front of her peers did not make her nervous.

“It was actually extremely relaxing,” Sestito said. “I usually get anxious when singing in front of an audience, but I felt very comfortable performing in front of all my friends, and even students that I didn’t know.”

Sophomore Lauren Tarigo of Sea Girt was one of the students in the audience and enjoyed every performance.

“I thought it was a great event,” Tarigo said. “It was a really fun and interesting way to see all of the talented acts.”

One of Clevenger’s favorite parts was the interaction between classes.

“I loved the way everyone from every grade level got along,” she said. “It was very casual and comfortable.”