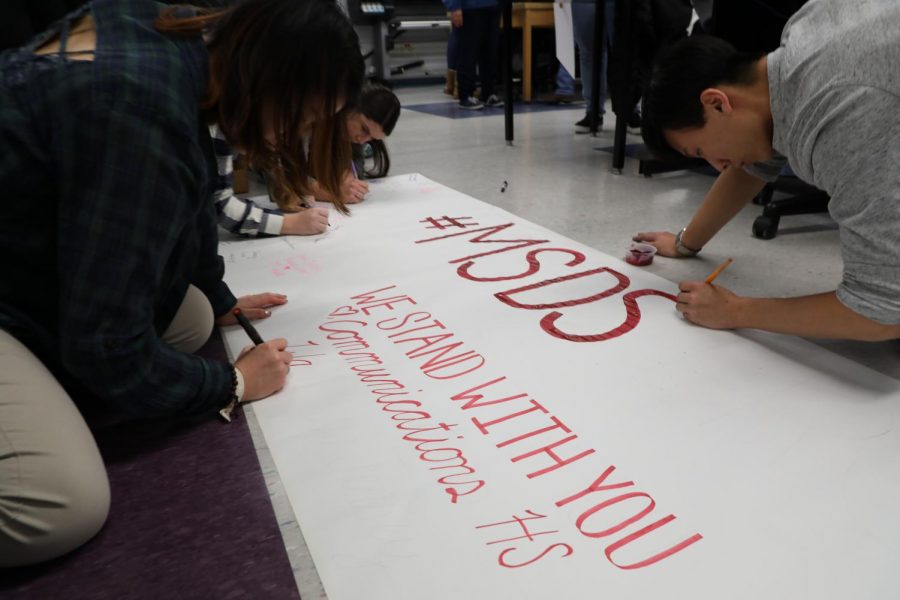 On Feb. 14, a shooting at Marjory Stoneman Douglas (MSD) High School in Parkland, Fla. left 17 students and faculty dead and 14 others wounded.

In the wake of this tragedy, students across America decided to stand in solidarity with victims and survivors to protect schools from another shooting, CHS students included.

The National School Walkout will take place on March 14, one month after the MSD shooting. Students across the country will walk out of their school building at 10 a.m. for 17 minutes, one for each life lost.

Other scheduled events include the “March For Our Lives” rally in Washington, D.C. on March 24 and the National High School Walkout on April 20, the 19th anniversary of the Columbine High School shooting.

Many CHS students are eager to participate in the upcoming events, and principal James Gleason supports a unified and organized project.

“If the students are behind a particular movement, we have a lot of opportunity here,” Gleason said. “Administratively, I’m here to support, but I’m looking for a plan.”

Student leaders, including class council members, the editors-in-chief of The Inkblot and NHS council members met with advisers on Feb. 26 to discuss plans of action.

During the meeting, attendees brainstormed ways to honor victims and families and improve the CHS environment.

A majority of student leaders agreed that a walkout should be included in the organized activities. Students will have the opportunity to walk out of CHS, in accordance with the National School Walkout.

“To me, it’s essential to have the walkout, just to be a part of that movement,” said senior council member Caroline Savage of Brielle.

Students also supported a panel discussion after the walkout, where students could speak to Gleason, local police and Board of Education members about their concerns regarding school safety.

Junior and SGA vice president Connor Martin of Spring Lake Heights said that the panel discussion would help students voice their opinions and concerns to those who can assist in making change.

“I think that it’s still important to recognize that we have power and a voice in our society, because that’s the way democracy is meant to work,” Martin said.

Security of students participating in the walkout was a primary concern. But junior council member Rebecca Rippon of Ocean voiced her concerns regarding the lack of internal security measures within the school, such as visitor and student IDs.

“We’re just as susceptible in here as we are out there,” Rippon said.

Meeting attendees also talked about long term actions that could influence our school. Inspired by a middle school’s plan, they decided that students would organize 17 different ideas for action against and education on gun violence, the first of which would be the walkout.

NHS adviser and math teacher Justine Lane said she hopes that the 17 actions will permanently alter the school’s environment.

“They’ll become something that’s like a cultural shift in the school towards school safety,” Lane said.

In the meantime, art teacher Shelley Ortner found a way for CHS students to send support to the survivors at Stoneman Douglas High School through art.

“The Broward County teachers were gathering up hearts to welcome the students back to the Parkland school this week,” Ortner said. “They were going to try and convert the hallways with hearts, messages of hope and encouragement.”

CHS students had the opportunity to decorate printed hearts on Friday, Feb. 23 at lunch in room 109.

Freshman Isabella Carmona-Ramirez of Long Branch sent support to her peers in MSD through a heart of her own.

“I think that’s a good way to show that students, even though we’re really far away, we still have each other,” Carmona-Ramirez said.

Ortner said that she believes the activity was beneficial to CHS students.

“I also think it was very therapeutic for them to be able to confront this and to give them messages of hope,” Ortner said. “It was good for the CHS students as I hope it will be for the Florida students.”

Ortner also facilitated a banner signing in room 109, organized by Savage and seniors Emme Leong of Freehold, Delia Noone of Middletown and Andrew Wang of Marlboro.

Ortner said student participation for the activities was unexpected.

“It was massive, I couldn’t believe it,” Ortner said. “There was such a huge amount of participation on both the banner and the hearts.”

The paper hearts and the banner shipped to Florida on Friday afternoon, in anticipation of the MSD student’s return to classes on Feb. 28.

Junior Michelle Moroses of Wall Township feels secure in CHS, but knows that no school is risk-free.

“Tragedies like this really can happen anywhere,” Moroses said. “I think that at this school we all do feel really safe, but it could happen anywhere.”