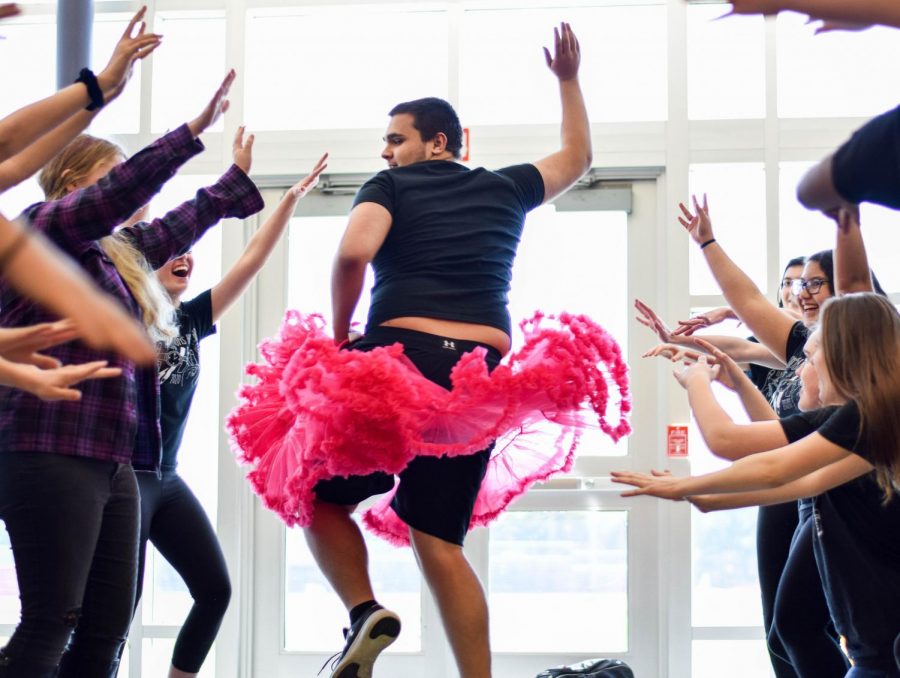 Sophomore RJ Franzen of Allentown dances to "I Will Survive" during Lip Sync.

With Lip Sync, one of the most competitive Spring Spirit Week traditions, Friday was a fitting day for each grade to decide what to wear on their own.

When lunch ended, the seniors had 210 points in first place, followed by the sophomores in second with 170 points, the juniors in third with 155 points and the freshmen in last with 115 points.

The juniors won Lip Sync for the first time, ending their third place streak. Junior Lauren DeFelice of Wall created many of the props the class used during their “road trip.”

“I started working on the props over spring break,” DeFelice said. “I was saying to council I had this vision of a literal Broadway-level play.”

DeFelice’s favorite prop to work on was the van.

“I just love how that one turned out,” DeFelice said. “The van took me the most time. It was a happy mistake that we painted it our class color. My dad picked out the paint can at the store, he brought it home and it was just a happy moment so it was nice.”

The contestants answered questions and competed in a talent portion. From singing to dancing to magic, the men of CHS showcased a variety of skills.

“I was gonna do Bop to the Top from High School Musical but somebody did that already,” Franzen said. “Caelin Burgi suggested I sing The Rainbow Connection and Colin Martin said dress up as a frog.”

At the end of the night, freshman Jake Polvino of Tinton Falls was crowned Mr. CHS.

“It feels amazing, I did not expect it whatsoever,” Polvino said. “I just tried to think of something different and gave it a shot.”

Sophomore Zach Weisenstein of Freehold had confidence in his grade’s ability to win.

“There wasn’t much of a challenge from the start,” Weisenstein said. “We got in second place every time beforehand so eventually we were going to get first.”

Sophomore Jack McHugh of Manasquan agreed that Spring Spirit Week was an easy victory for the Class of 2020.

“It feels like light work,” McHugh said. “Because we’re the best and no one can stop us.”