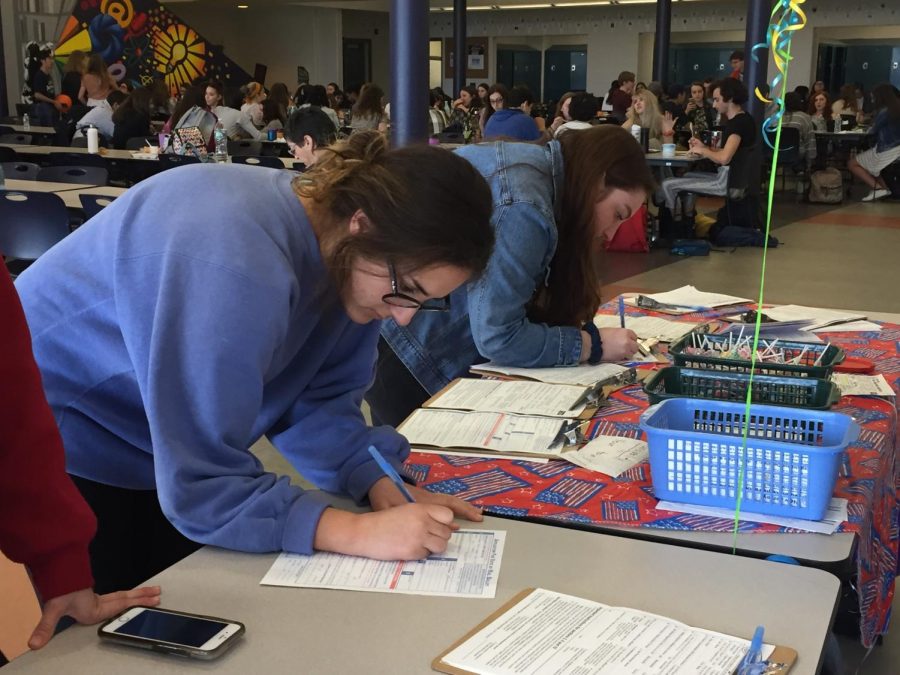 CHS students ages 17 and 18, who are chomping at the bit to hit the ballot booth, were given the opportunity to register to vote in school on Thursday, Apr. 26. Maryanne DeVarti from the Greater Red Bank League of Women Voters headed the event, which took place during lunch.

To register, students filled out a form that required information such as name, birth date, gender and the last four digits of the student’s social security or driver’s license number. The form gave students the option to register as affiliated with a specific political party, but it was not required.

“My goal is to register high school students and get them out to vote in November,” DeVarti said.

DeVarti achieves this goal by reaching out to schools herself, even if a school does not show prior interest in DeVarti’s service.

“I track down schools, and I knock on doors, and I make phone calls,” DeVarti said.

Through her work, DeVarti estimates that she has registered about 300 high school students to vote since the beginning of this school year, one of them being junior Clare Toman of Spring Lake Heights.

Toman said she did not see any real reason not to take up the opportunity. She is ready to vote on gun laws and other topics she cares for.

DeVarti offered a vote by mail option for seniors who will be away at college in the fall.

“If they register to vote at their current address, that means they have to get back to that polling place by their current address. If they are going off to college, they can put a check on the application that will send a ballot to their parents,” DeVarti said. “The parents are then responsible for sending it to their kids at college. This way they can vote who they want, put a stamp on it and send it in.”

DeVarti’s dedication stems from her belief that teen voters can make a difference.

“If teen voters actually get out to vote on this midterm election they can change the world because you guys have all the power right now,” DeVarti said.  “The adults, I think, have failed you, so you have to vote for what you believe in. If you believe Democrat: vote Democrat. If you believe Republican: vote Republican.”

DeVarti plans to return to CHS in the fall to register the next round of young voters.