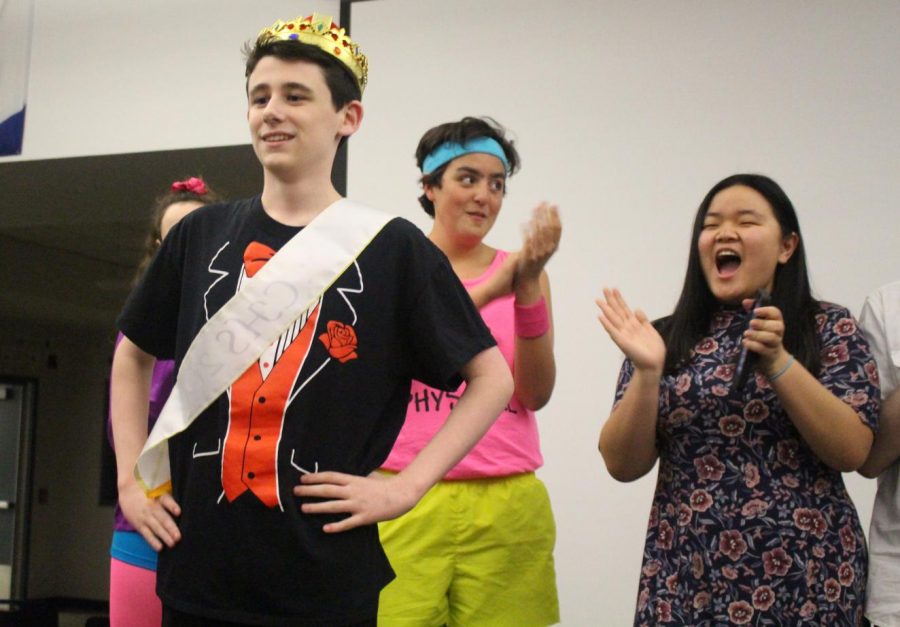 On April 20, the boys of each class competed for both the prestigious title of Mr. CHS and points that had the power to make a major impact on their grade’s Spring Spirit Week score.

SGA President Jackie Geller of Manalapan along with Vice President Connor Martin of Spring Lake Heights hosted the event. However, contributions came from everyone on SGA, Martin said. Besides Martin and Geller, there were also people choreographing a group dance, organizing the participants and selling tickets.

“There was a lot of work that went into the event,” Martin said. “Everyone on SGA made huge contributions to make Mr. CHS possible. Jackie and I also worked together to prepare the script and make sure the evening ran smoothly.”

At the beginning of the pageant, contestants partook in the group dance routine and a question and answer session, led by Geller and Martin. Each contestant then presented an act to showcase their talent. These talents ranged from musical performances to creating art live on stage.

“I’m really happy with how [the performance] turned out,” Battista said. “I didn’t steal the show, but people really seemed to enjoy it overall.”

Multiple other contestants chose to sing for their act, such as sophomore RJ Franzen of Allentown, who performed “Rainbow Connection” from “The Muppets Movie” with his escort sophomore Meredith Prud’homme of Ocean.

“I kept singing the karaoke version of ‘Rainbow Connection’ until I learned it,” Franzen said. “I would always sing it in class.”

Franzen’s efforts produced results; he won both Most Entertaining and People’s Choice, which gave the sophomores 50 and 75 points, respectively. Other awards included Best Talent, awarded to junior Liam Marshall of Sea Girt for 50 points, Best Presentation, awarded to senior Cameron DeStefano of Middletown, and Best Pair, awarded to seniors Robert Denny of Keyport and Ebbie Shim of Spring Lake Heights.

The judges consisted of forensics teacher Leah Morgan’s children, their friends and Geller’s cousin. The judges panel decided the winners for all categories, with the exception of People’s Choice. Audience members placed ballots in the bucket of their favorite contestant to determine the category winner.

At the end of the night, freshman Jake Polvino of Tinton Falls was named Mr. CHS. Polvino’s act was a stand-up comedy routine centered around middle school relationships. This win gained 75 points for his class. In addition, Polvino is the first freshman to win the title.

“Being awarded Mr. CHS is such an honor,” Polvino said. “I was so happy to know that other people enjoyed what I did and I was able to make them laugh.”

Overall, the sophomores took first place with a total of 295 points. Behind them were the seniors with 285 points, the juniors with 205 points and the freshmen with 190 points.

Though his class placed in fourth, Polvino says he is nevertheless content with both Spring Spirit Week and Mr. CHS.

“I was super excited with the results of Mr. CHS. I couldn’t ask for much more than winning the whole thing,” Polvino said. “Even though the freshmen came in last place, I had a great time and I wouldn’t change a second of it.”