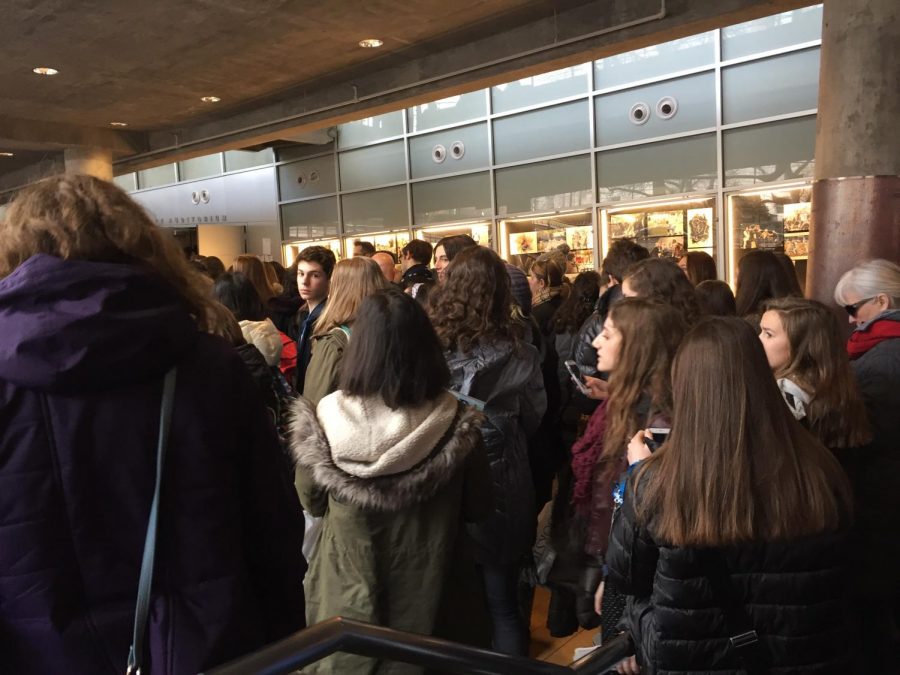 One of the more popular sessions at the CSPA conference, CHS students were among the attendees waiting in the crowd for the presentation by students from Marjory Stoneman Douglas High School.

The Columbia Scholastic Press Association welcomed 10 staff members of The Inkblot to its Spring Conference at Columbia University in New York City from Wednesday, March 14 to Friday, March 16. Inkblot representatives experienced life on a college campus by attending seminars along with other student journalists from across the country.

The trip, run by The Inkblot, gave those chosen an opportunity to expand upon their journalism knowledge and writing techniques.

Inkblot adviser and Mass Media teacher Andi Mulshine chaperoned the trip and said the decision for which sophomore and junior students attend is based on their commitment to the newspaper.

“We don’t take typically take seniors because they wouldn’t be at school next year to use the knowledge that we gain from attending the conference,” Mulshine said. “Our delegates are generally the most interested and the most hardworking staff members.”

Assistant Social Media Editor Evan Kuo of Tinton Falls was the only sophomore to go on the trip. Kuo said he enjoyed the opportunity to be on a campus, but remembered the activities students partook in after the conference each day.

“The first night we went skating at Rockefeller Center and walked around 30 Rock,” Kuo said. “We also got to see ‘Kinky Boots,’ which was super good.”

Mulshine said one of the most impactful experiences for the attendees was the session presented by student reporters from Marjory Stoneman Douglas High School, the location of the Feb. 14 shooting that took 17 lives.

“The young journalists shared how they used their journalistic skills to report the event and record students’ reactions,” Mulshine said. “Conference participants, including our own, were moved by the presentation.”

Students that attended the seminars gained information to help expand their writing techniques in order to become stronger writers.

In addition to seminars, each year the CSPA hosts the Student Awards Convocation in which publications are awarded for their work.

Most notably, The Inkblot was awarded a Silver Crown for the 2016-2017 school year. The paper was judged among 1,100 digital and print publications sourced internationally, including literary magazines and yearbooks, according to the CSPA.

“Publications are judged on their excellence as shown by their design, photography, concept, coverage and writing,” according to the CSPA.

Also, the two page spread “The Elephant in the Room” about the sexual climate among teenagers from volume 15 of The Inkblot was awarded second place in the Gold Circle Awards.

Sports writer and junior Mia Gallo of Matawan said the trip gave her new a insight into writing.

“I found the seminars incredibly valuable and I learned a lot of new techniques that I can’t wait to apply to my own writing,” Gallo said. “I am so thankful that I had this opportunity to learn ways to grow as a journalist.”