CHS students walk out in solidarity with national movement 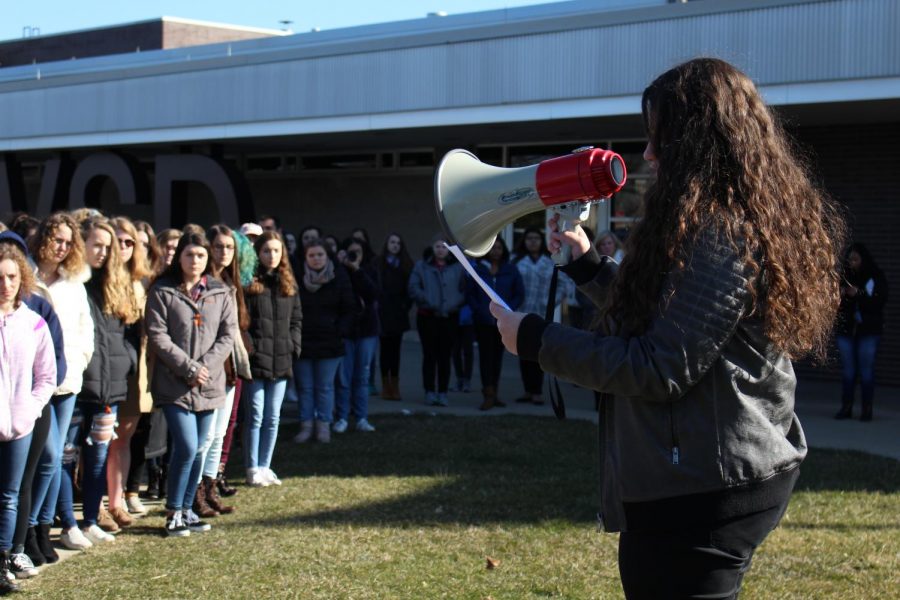 Freshman Francesca McCaffrey of Oceanport was one of 17 students who read the names of the victims of the Florida school shootings.

In solidarity against gun violence and to honor the victims of the Majority Stoneman Douglas tragedy in Parkland, Fl., CHS students walked out during the school day on March 14. It was part of the Nationwide School Walkout, a movement that included high schools across America.

In accordance with the National School Walkout, CHS students gathered in the parking lot at 10 a.m. for 17 minutes, a minute for each life lost in the Parkland shooting. Volunteers read the names and short biographies of each victim.

Another portion of the student body partook in a similar indoor rally with a ceremony that mirrored the one outside the building. Students that did not wish to participate in either reported to Room 107 for the 17 minutes.

Homeroom teachers distributed orange ribbons so that students in every location could show support for the movement.

SGA President and senior Jackie Geller of Manalapan said planning included the input of both student leaders and faculty advisers. Principal James Gleason requested a meeting of class council members, the editors-in-chief of The Inkblot and NHS council members and their advisers to discuss CHS’s role in the current movements.

“We heard varying opinions from students and teachers,” Geller said. “As an entire team, we cultivated a plan that allowed CHS students to feel comfortable and safe during the walkout time.”

“Once I heard a national walkout was being scheduled, I wanted to get together because I think it’s about the students,” Gleason said. “We met to decide how we would work with the student body.”

Wall Township police were present at the walkout to ensure the safety and security of the school.

“[I wanted to make sure] that we have a safe event and that we’re all on the same page,” Gleason said. “I think ultimately that’s what you saw yesterday.”

CHS will continue its work against school gun violence. Student leaders will be initiating a total of 17 events students can take part in to keep a safe and welcoming school environment. The first of the 17 was the walkout. Geller said these projects will include educating students on gun laws in New Jersey, registering to vote and other ways to take action for change.

Sophomore Sidney Washington of Asbury Park was pleased with the walkout and how it was run.

“I like how the school helped us plan this,” Washington said. “It shows how they care about us and what we do.”

Approximately two thirds of the school walked out, Geller said. She was satisfied with the walkout and its active participation.

“Being part of the walkout has been such an honor and a privilege,” Geller said. “[It] made me realize how lucky I am to attend a school where so many people have the courage to ask for their message to be heard.”